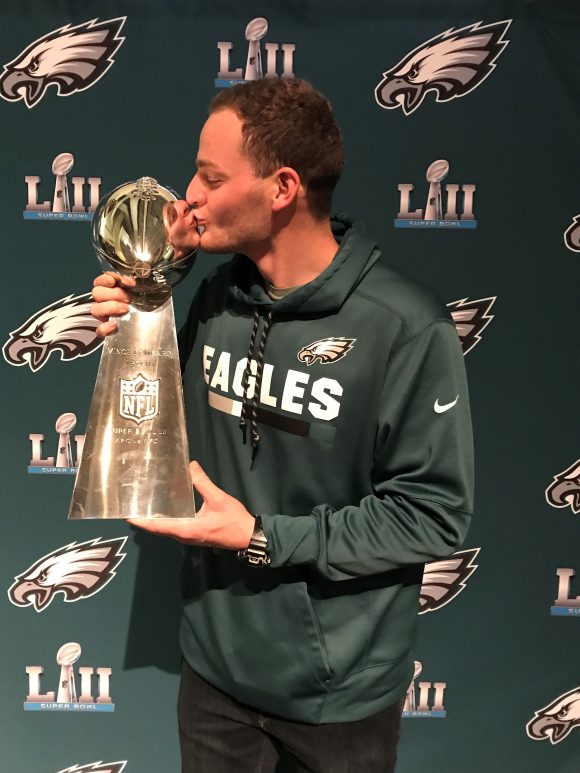 Winners of Super Bowl LII, the Philadelphia Eagles played hot while their grounds crew kept their home playing field warm. To be exact, the turf managers kept the soil at precisely 59 degrees throughout the summer and winter months using 28 miles of underground heating pipes. This intricate turf-warming system is divided into six zones and creates an optimal root temperature that keeps the grass growing through the end of the NFL post-season.

The science behind keeping Lincoln Financial Field at peak ‘playability’ goes well beyond regulating temperatures. The greens team also monitors a SubAir system that can suck moisture out of the ground, so that excess water does not linger in the soil. Mowing heights and fertilizing schedules are also precisely calculated and controlled. Professional sports fields like the home of “the birds” are perfect examples of the art and science of turfgrass management.

To get this insider’s view, OCPE spoke with Conor Geisel, who interned on the grounds crew for the Philadelphia Eagles this past season and will graduate from the OCPE Rutgers Professional Golf Turf Management School’s Two-Year Certificate Program in March 2018.

After arriving on the Rutgers campus, Conor dove right in, leveraging the Rutgers turf community to grow his professional network. Conor started by asking Steve McDonald, instructor of the class on turf weeds, for help making connections in the sports world. Founder of Turfgrass Disease Solutions, LLC, McDonald has more than 15 years of experience consulting with over 100 golf courses annually. He put Conor in touch with Tony Leonard,  Eagles’ director of grounds. The Rutgers turf student submitted a resume, interviewed and secured a coveted internship with the Eagles’ franchise.

“Networking is key,” said Conor. “You never know who you may meet in a day who can help you further your career. Even if it is just getting an internship, you never know where it may lead.” 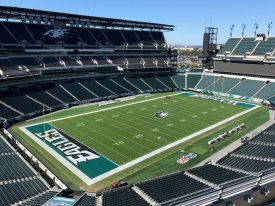 Conor worked on the greens teams at the Philadelphia Eagles in the 2017-18 season during his time off between his two 10-week academic sessions at the Rutgers Professional Golf Turf Management School. Turfgrass management deals with soil fertility, irrigation, aeration, diseases, weeds and insect pests whether you maintain a golf course, municipal park or baseball field. Nevertheless, working on an NFL football field certainly has its own unique attributes.

As an intern, Conor helped care for the team’s practice facility, about 275,000 square feet, as well as the stadium field itself, 75,000 square feet. Interestingly, the Eagles use both warm and cool season grasses to blanket the playing field. Conor explained that the Philly facility uses Bermuda grass (Cynodon dactylon) in the warmer months because it plays better and grows fast. For the November, December and January games, the grounds crew ripped up the entire field and did a number-to-number, goal-line-to-goal-line resod with Kentucky Bluegrass (Poa pratensis).

One major difference between working on a golf course versus a professional football organization is budget. If your NFL boss isn’t happy with how the turf is holding up, they may tell you to re-sod. Instead of topdressing or trying to address the issue in another way, they pay a premium to start fresh. To put it simply, “Budget is no issue for the NFL,” said Conor. In fact, the entire stadium is typically re-sod at least three times a year.

Another major difference is painting. Because the stadium is also used for Temple University college football games, the field is painted and repainted each week. After the completion of each Temple Owls game, Conor and his coworkers ripped up the end zones and laid new sod down as a “fresh canvas” for the Philadelphia Eagles logo. 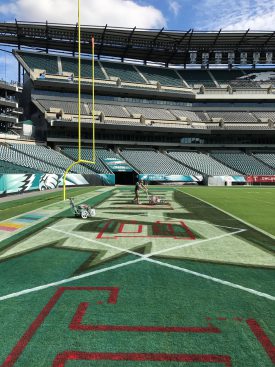 “We rolled out huge stencils to paint both end zones, the sidelines, the numbers, the hash marks and the four-color Eagles logo in the middle of the field,” explained Conor. Once the Eagles finished playing, the grounds crew would paint the cherry red and white Temple patterns right over the Eagles’ midnight green. Conor estimates that painting and repainting the field takes about 400 gallons of color – every week!

As exciting as it is to be around Super Bowl champions, the work takes precedence. Sharing the same cafeteria and working in the same buildings, Conor was often near the famous athletes, but he remained professional. “We are all at work, so it’s not like I’m going to sit there and ask for an autograph,” he said matter-of-factly. “The majority of my conversations with players were asking them to stay off the wet paint,” he laughed. But some of his brushes were exciting. For example, once at a charity event, wide receiver Tory Smith mistook Conor for quarterback Carson Wentz. “I have actually gotten that a few times,” he chuckled.

Besides the close proximity to the likes of Nick Foles, Malcolm Jenkins, and Zach Ertz, one of the perks of working for the Philadelphia Eagles grounds crew was being on the field during each game. Part of Conor’s responsibility was to pull the safety nets behind the uprights when either team lined up to kick a field goal. The team even sent him to the Super Bowl. Indeed, he had the pleasure of watching the Philadelphia Eagles defeat the New England Patriots in person at the U.S. Bank Stadium in Minneapolis, Minnesota. While there, he took advantage of the opportunity to hold (and kiss!) the Vince Lombardi Trophy.

Although Conor will not return to the Lincoln Financial Field grounds crew next season, he is thrilled that Rutgers helped him secure the opportunity to be part of the Eagles’ franchise the year the team went all the way.

“I always wanted to work with turf,” he said. Conor grew up in a sports family. His father coached and both he and his brother played football. He has fond memories of going to training camp as a kid. “There is just something about the smell of grass getting cut early in the morning,” he said. At a young age, Conor appreciated the look of manicured sport turf and knew that he wanted to forge his career in the turf industry.

After graduating with a degree in business from Lycoming College in Williamsport, PA, Conor got his feet wet in the turf industry working at Manasquan River Golf Club in Brielle, New Jersey. Hearing how the Rutgers Professional Golf Turf Management School’s Two-Year Certificate Program helped many of his peers advance their careers, Conor applied and enrolled. A combination of its reputation, convenience and cost steered him to Rutgers over other educational options.

Clearly it worked out for him. First, connecting with instructor Steve McDonald was the key that helped him attain his epic football internship. Next, with the internationally-recognized two-year certificate within his grasp and on his resume, Conor recently secured a position as assistant superintendent at Medford Village Country Club in Medford, New Jersey.

“I haven’t even graduated yet and it has already paid off,” said Conor. “With this assistant superintendent job, I am exactly where I want to be on my career path.”