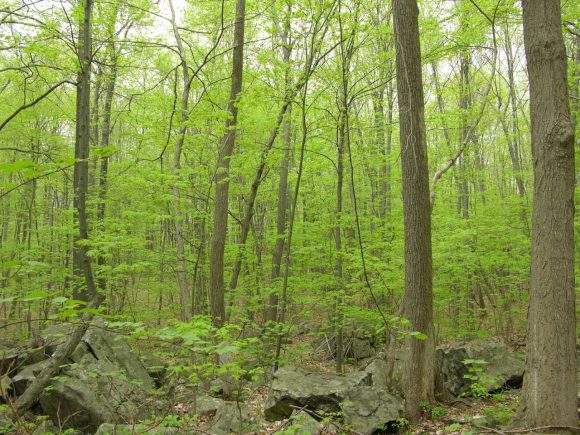 Striped maples wait to last minute before choosing their sex

A few years ago, Rutgers researcher Jennifer Blake-Mahmud was working on a botany project in Virginia when colleagues pointed out a striped maple, a common tree in the understory of mountain forests from Nova Scotia to Georgia.

“They told me, ‘We think it switches sex from year to year, but we don’t know why,’ and I said, ‘How can that be?’ Blake-Mahmud said. “And that was when I decided I needed to find out what was going on.”

In research published in the journal Trees: Structure and Function, Blake-Mahmud reports that striped maples not only change their sex periodically, but that they can wait until the last minute – three weeks before flowering – to do it. The switch appears to be triggered by physical damage, which can prompt a branch to flower female if it’s cut off a male tree.

Blake-Mahmud, a doctoral student in the School of Graduate Studies Plant Biology Program at Rutgers University-New Brunswick, cut branches from healthy, mature striped maples from state forests in northern New Jersey. She took the samples to her lab, where she let them flower.

She expected that striped maples, like most trees, would prepare themselves for reproduction by fashioning the tiny flower sex parts many months before they flowered. Apple trees, for instance, have already made their buds for the next year just six-weeks after flowering finishes for this year. Surprisingly, the cuttings from her striped maples waited to finish developing. Even three weeks before natural blooming time, the buds were still flexible and could bloom female if cut off the tree or male if left untouched. This means that the tree can wait until very late to make up its mind about which kind of flowers – male or female – to have. “These trees were the arboreal equivalent of last-minute Christmas shoppers,” Blake-Mahmud said. 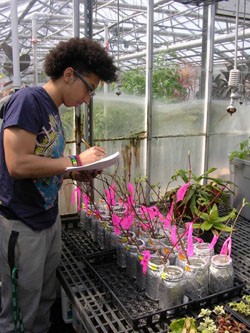 Carlos Olivares, Class of 2017, worked with Blake-Mahmud to check the sex of striped maple flowers on branches blooming in the greenhouse. Photo: Jennifer Blake-Mahmud.

The trigger turned out to be the act of cutting a branch off the tree, which amounts to physical damage. And most of the branches taken from male trees expressed themselves as female when they bloomed in the greenhouse. Blake-Mahmud said this suggests that physical damage plays a role in sex expression, although she isn’t certain yet what sort of damage. She noted that even without people cutting off branches, striped maples lead a perilous life. “There are deer rubbing their antlers against them, bears scratching against them, taller trees that die and fall on them,” she said.

Blake-Mahmud’s co-author and adviser is Lena Struwe, a professor of plant biology, ecology, evolution and natural resources in the School of Environmental and Biological Sciences.

Blake-Mahmud noted that arboreal sex isn’t a field that many people are familiar with. When she explains that she’s a botanist who studies how plants express sex, she often gets two reactions. “People say, ‘Whoa, plants have sex?’” Assured that plants do, people then often ask why she doesn’t study sex in animals. “I tell them that sex in plants is much more complex, much more interesting, than sex in animals,” she said. “If you’re interested in reproduction, plants are definitely the way to go.”