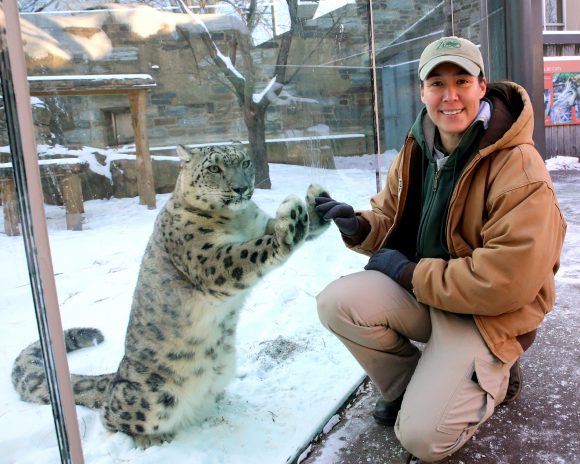 If you’re a zookeeper assigned to the big cat exhibit (think lions, tigers, leopards, jaguars) you are expected to develop a relationship with the animals, even a 350-pound lion. How do you do that?

There are 19 cats in the zoo’s collection, and “having a relationship” with them includes training these essentially wild animals to participate in their own health care. For example, they are trained to lie down to be examined or to take injections against such diseases as rabies and feline and canine distemper. 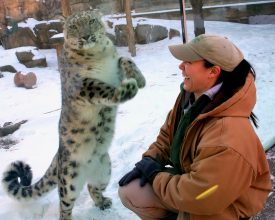 To accomplish this training is “almost instinctive,” according to Robertson. “I let them be the cat and me be the person. I don’t threaten them with eye contact,” she said. It also helps that she and the other big cat keepers maintain a healthy respect for the animals and bond over time, ideally beginning when the cats are still young cubs.

Robertson majored in animal science at Rutgers and originally thought she wanted to go into veterinary medicine. But after graduation she took a job in Florida with a zoo and found she preferred the “behavioral aspects of working with animals rather than the medical aspects,” she said. She plans to maintain a direct connection with her charges rather than, for instance, moving into a curator position or some other job not directly associated with working with the animals.

She joined the Philadelphia Zoo in 2004, and in 2006 the zoo’s big cat exhibit underwent a $22 million renovation that propelled it to major attraction status and a corporate sponsorship. The Philadelphia Zoo offers programs for individual visitors and groups such as “A Night at the Zoo,” “Member Morning Strolls,” conservation workshops and special events. Another feature is “Big Cat Crossing,” an innovative 330-foot walkway above the zoo that allows the big cats to roam from exhibit to exhibit in the KeyBank Big Cat Falls. The walkway lets them stretch their legs and satisfy their curiosity, all the while thrilling visitors who can watch a lion or tiger watching them in the structure overhead.

Her work also has taken Robertson abroad. She traveled to Namibia in Africa in 2012 for a lion project and to Belize in 2014 to study jaguars.

Conservation and sustainability are very important to Robertson and the Philadelphia Zoo, which is a member of the Association of Zoos and Aquariums, an accrediting organization that emphasizes animal care initiatives, education and conservation programs, collaborative research and advocacy.

Robertson said that zoo-keeping at that level benefits the animals in many ways: much longer lifespans than in the wild, better health care, balanced diets and medical attention that, for instance, keeps the animals disease- and parasite-free. Organizations like the Philadelphia Zoo also concern themselves with protection and propagation of endangered species, such as the Amur leopard, which is among Robertson’s charges. 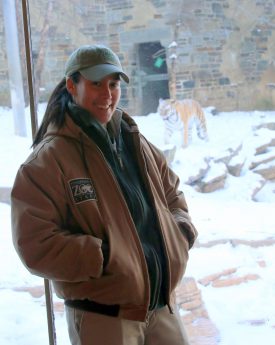 Robertson was born in Highlands, New Jersey (Monmouth County), and currently lives in Franklinville in Gloucester County, New Jersey. Her love of animals drew her to the Department of Animal Sciences, and “the top-notch courses and the hands-on experience via the animal practicum” kept her motivated. She recalls several professors who made her education special—Drs. Larry Katz, Barry Jessie, Sarah Ralston, Michael and Suzanne Sukhdeo, and Carol Bagnell, to name a few.

Their influence, plus the opportunity to pursue international field work, led her to pursue her master’s degree in biology with Miami University of Ohio, which she is accomplishing largely online. Her field work took her to Mongolia for a course focusing on Pallas’s cat, Przewalski’s horse and participatory conservation media. She said she is hoping that this year she will have the opportunity to go to India to study tigers.

If you happen to be visiting the Philadelphia Zoo, Jennifer Robertson encourages you to look for her at the big cat exhibit. Or better yet, she said, bring a group and she would be happy to take you to meet her cats and learn about them—up close and personal.