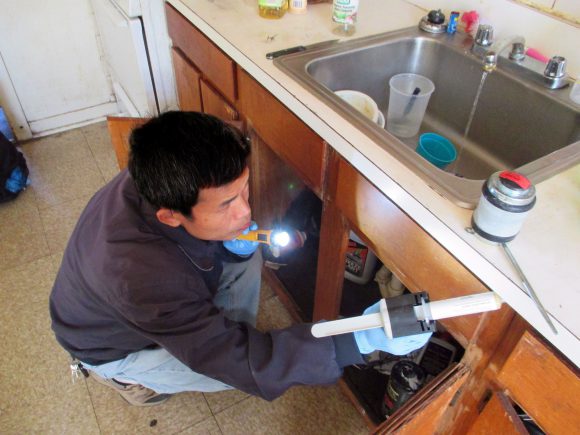 Changlu Wang, associate extension specialist, at work in one of the apartments. Photo: Changlu Wang.

Your mom’s advice on keeping a home free from cockroaches and bedbugs is reinforced by science.

To keep these pests from invading, follow the common-sense rules of cleanliness. To kill them, use traps and bait. Don’t bother using foggers, sprays and aerosols, which are less effective and can contaminate food, floors and counters.

These insights were confirmed by a seven-month collaboration between Rutgers University-New Brunswick and the New Brunswick Housing and Redevelopment Authority and led by Changlu Wang, associate extension specialist in the Department of Entomology at the School of Environmental and Biological Sciences. The resulting study is published in the Journal of Economic Entomology.

Wang and his team did their survey in a public housing project with 258 apartments in 40 buildings. Their first step was to find out which pests, and how many of each pest, lived in those buildings. Cockroaches were present in 28 percent of the apartments; rodents in 11 percent; bedbugs in 8 percent. Surprisingly, this kind of pest data for an entire community is hard to come by, Wang said.

“The usual way to figure out how many of what pests are in a community is to count complaints,” Wang said. “And complaints are just not very reliable, because not everybody complains.” 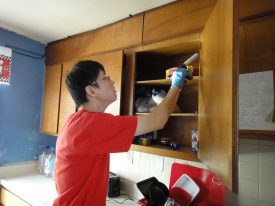 Chen Zha, graduate student and a co-author on the paper, at work in one of the apartments. Photo: Changlu Wang.

Wang and his team visited all accessible apartments in the community and set traps in strategic spots in each apartment, which not only helped them identify pests but identify where they were coming from. They then treated those apartments using baits and traps, and reduced the number of cockroach infestations by 85 percent over seven months.

As they counted cockroaches and laid traps, Wang’s team also talked to the residents about how to avoid cockroaches in the first place and how to deal with them once they arrived.

“With cockroaches, the best way to keep them away is to keep the kitchen clean,” Wang said. “Don’t leave food around; wash the dishes often; reduce the clutter in your kitchen as much as possible.”

And once the little beasties show up, call the maintenance people. “Our maintenance people do a routine visit every month,” said John Clarke, the authority’s executive director. “But a lot can happen in a month. If you see a cockroach on day three, and wait until our guys come on day 28…well, let’s just say it would have been better to call us on day three.” 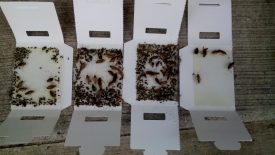 Wang’s team also took samples from kitchen and bedroom floors in 17 apartments to measure the presence of insecticide residue from the past use of pesticides at the beginning of the study and seven months later. They found both the numbers of insecticides present and the amount significantly reduced. The results prove that using a combination of education, baits, and traps is more effective than using foggers, sprays and aerosols. “Sprays are less effective because cockroaches are increasingly resistant to them,” Wang said. “Plus, they can contaminate the food, the surfaces of floors and counters. They’re especially dangerous to children, because children crawl around on the floor.”

The study was funded by a $20,000 University Community Research Partnership for New Brunswick grant, administered by Rutgers’ Department of Community Affairs. It was the second such grant for Wang, who previously worked on reducing bedbug infestation in one of the Housing Authority’s properties. “This study was a big help to our residents and our staff,” Clarke said. “My only wish is that we could have another grant like this every two or three years.”

This story appears on Rutgers Today.