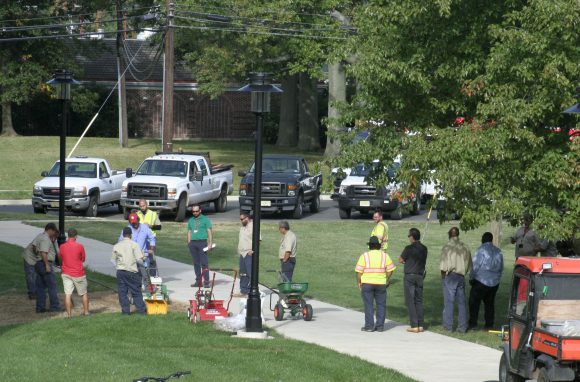 A critical component of urban ecosystems, turfgrass protects and enhances our environment through soil stabilization, carbon sequestration, cooling, nutrient and pollution filtration, reduced runoff, increased ground water recharge, dust reduction, and other mechanisms. As the U.S. population becomes increasingly concentrated in urban areas, turfgrass will continue to play a key role as a component of the urban greenscape. 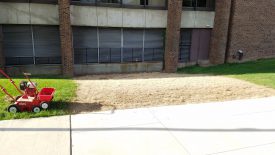 Prior to the training session, the selected demo plot was treated with glyphosate to kill the established turf.

Kentucky bluegrass and perennial ryegrass are currently the two primary species used for turf in the northern U.S. These species provide a high quality turf when managed with sufficient inputs; however, there has been increasing attention drawn to the negative aspects of higher input turfs, including the excessive use of water, fertilizer, fossil fuels, and pesticides. There are already several examples of governments regulating inputs into turf systems including cosmetic pesticide bans in parts of Canada and some U.S. municipalities, irrigation ordinances, and nitrogen and/or phosphorus fertilizer restrictions in some U.S. states. For instance, New Jersey’s Fertilizer Law (New Jersey Act, P.L. 2010, c. 112) protects the state’s surface and ground waters from impairment by minimizing fertilizer nitrogen and phosphorus loading that originates from lawn runoff. 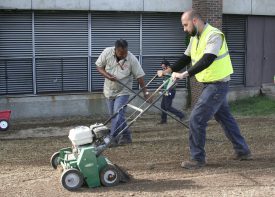 A multi-state research project to establish demonstration plots across approximately 20 northern U.S. college campuses and to generate multi-disciplinary conversations about transitions to low-input turf is being spearheaded by University of Minnesota. Faculty from several departments at Rutgers School of Environmental and Biological Sciences and New Jersey Agricultural Experiment Station are involved in this initiative, which involves various phases to allow participants to evaluate the social, economic, and environmental barriers and benefits of transitioning to fine fescue lawns. 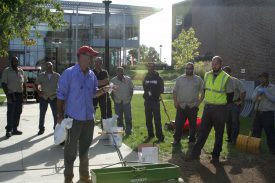 Rutgers is currently implementing the first phase of the study that evaluates campus transitions from traditional turfgrass to low-input turfgrass. Faculty and staff from the Rutgers Center for Turfgrass Science, the Soil Testing Lab, Office of Agriculture and Urban Programs and the Departments of Landscape Architecture, Human Ecology, and Ecology, Evolution, and Natural Resources, and Rutgers Facilities—Operations and Services—Grounds and Fleet Services are participating in the implementation at Rutgers. The Rutgers team identified several potential plots of turf on the George H. Cook Campus and ultimately chose the location north of the Food Science building, facing the Cook/Douglass Lecture Hall for reseeding to fine fescue.

On September 22, staff from Facilities attended a training session on preparing and seeding the bed, led by turfgrass education and research associate Brad Park, and Plant Biology graduate student Kyle Genova. The site, as specified by the study, was predominately Kentucky bluegrass and/or perennial ryegrass growing in a mix of sun and shade along the north side of the Food Science building. Several weeks prior, the plot area (about 600 ft2) was treated with glyphosate to kill the established turf. At the training, the soil was prepared and fertilized, based on soil test results, and seeded with a 3-way mixture of hard, Chewings, and strong creeping red fescues. The seeding was mulched and stabilized with a fiber blanket. Upkeep of the site will be the responsibility of Rutgers Facilities. The project demo sites will be identified with signs to draw public attention to the project. The signs will include a QR code that leads to the project website for more information.

Many campuses, including Rutgers, have multi-use turfgrass areas similar to traditional public lands such as parks, municipal building grounds, etc. The component of the research focused on implementation and evaluation of the fescue plots will provide extensive data regarding transition barriers and benefits before, during, and after conversion to fine fescue. An additional benefit for the participating universities is that they can use the site for additional instructional or research purposes, i.e., as a living/learning laboratory, as well as to inform future land management decisions.