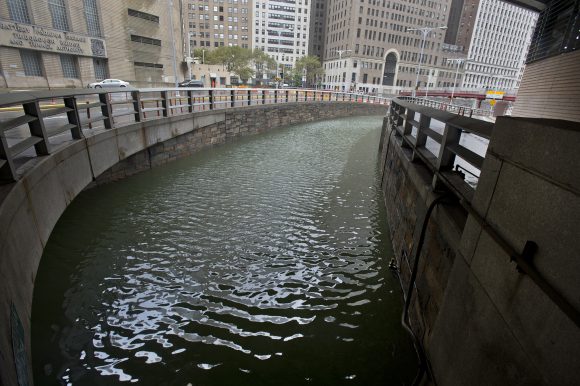 The Hugh L. Carey Tunnel, which connects Manhattan and Brooklyn, during the flooding resulting from Superstorm Sandy in 2012. Photo: Metropolitan Transit Authority.

Floods that once occurred every 500 years on average could average every five years after 2030, even though hurricanes may steer further offshore

As the fifth anniversary of Superstorm Sandy nears, scientists Andra Garner and Benjamin Horton from the Department of Marine and Coastal Sciences and Robert Kopp, director of Rutgers Energy Institute, have some good news and some very bad news for the residents of New York City.

The good news is that heights of storm surges – the coastal flood phenomena that combined with rising sea levels and high tides to devastate parts of New York City in 2012 – may remain the same over the next 200 years. The very bad news is that flooding will nevertheless be much higher and more frequent, because sea levels will continue to rise at an accelerating rate.

In a study published today in the Proceedings of the National Academy of Sciences, Garner, Kopp, Horton and their co-authors use computer models of future hurricanes and a range of projected sea levels to estimate the size of future floods.  They compare the future with observations of the present and geological records of the past.

Although hurricanes will likely become stronger in a warmer climate – much as warm ocean waters helped propel Hurricanes Harvey, Irma and Maria to the highest intensity levels – the researchers indicate that the storm tracks will shift seaward at the latitude of New York City, minimizing the increase in storm surge.

However, sea-level is rising at alarming rates, with about 5 to 11 inches of sea-level rise likely in New York City between 2000 and 2030. When rising sea level is added to the storm surge height, the researchers report that a flood of 7.4 feet above sea level, which  occurred once every 500 years on average before 1800, and once every 25 years on average between 1970 and 2005, could average once every five years by 2030.

The researchers note the scientific consensus that global sea level will continue to rise in the coming centuries, though how high it will rise is still uncertain. Over the longer term, sea-level rise at New York City could exceed 8 feet by the end of the century if, in a high-emissions future, the West Antarctic Ice Sheet rapidly melts

Garner is a postdoctoral fellow in the Department of Marine and Coastal Sciences, part of the School of Environmental and Biological Sciences at Rutgers-New Brunswick. Horton is a professor of marine and coastal sciences in the same department, and also a professor at Nanyang Technological University in Singapore. Kopp, a professor of earth and planetary sciences in the School of Arts and Sciences, is also director of the Institute of Earth, Oceanic and Atmospheric Sciences at Rutgers-New Brunswick.

The other authors of the study were Michael Mann, Richard Alley, and David Pollard at the Pennsylvania State University; Kerry Emanuel at the Massachusetts Institute of Technology; Ning Lin at Princeton University; Robert DeConto at the University of Massachusetts Amherst; and Jeffrey Donnelly at Woods Hole Oceanographic Institution.