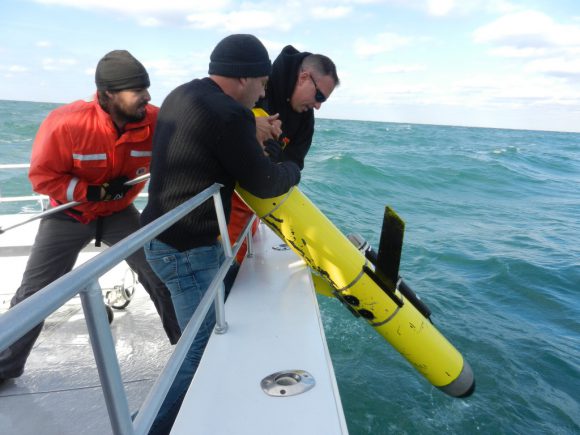 On Nov. 5, 2012, Travis Miles on the left, Capt. Jared Polick and crewman Joe Lampson haul the glider back aboard Polick’s boat, the charter vessel Fin-Ominal. They had deployed the glider four days before the storm struck. Photo: Kaycee Coleman.

Four days before Superstorm Sandy made landfall in New Jersey, scientists from the Department of Marine and Coastal Sciences launched a data-collecting, submersible robot glider in front of the massive storm. 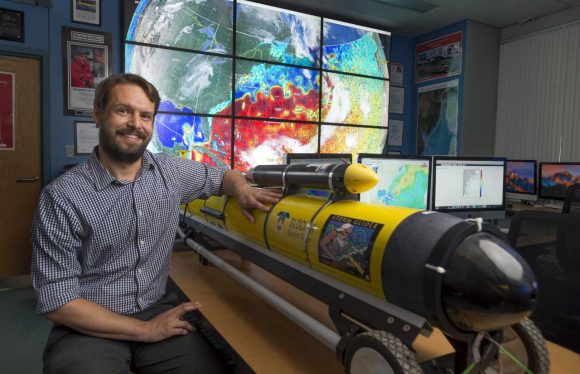 Travis Miles, with the submersible robot glider he and Greg Seroka deployed in front of Superstorm Sandy in 2012. Notice the velocity sensor attached to the top of the hull. Photo: Nick Romanenko.

The robot glider they used was one of a fleet that the Rutgers University Center for Ocean Observing Leadership (RU COOL) is deploying in oceans across the globe that have helped change the field of oceanography and the way scientists understand weather, marine life, and related areas.

Their paper on the data gathered by the glider – published recently in the Journal of Geophysical Research: Oceans – explains the peculiar ocean systems that helped make Sandy so destructive. Their data has also contributed to models now being used to forecast the intensity, size and track of these storms. The authors include Travis Miles and Greg Seroka—both graduate students at the time—and Scott Glenn, distinguished professor and co-director of RU COOL.

Travis Miles, an assistant research professor explained that there is a cold water mass called the Cold Pool that stretches from Cape Cod to Cape May, and when Sandy turned left across the continental shelf, it pushed that cold water out to sea so that the water it the passed over remained warm, preventing the storm from weakening as it came ashore in New Jersey and New York.

Read more about the gliders and the important data they collect in Rutgers Today.