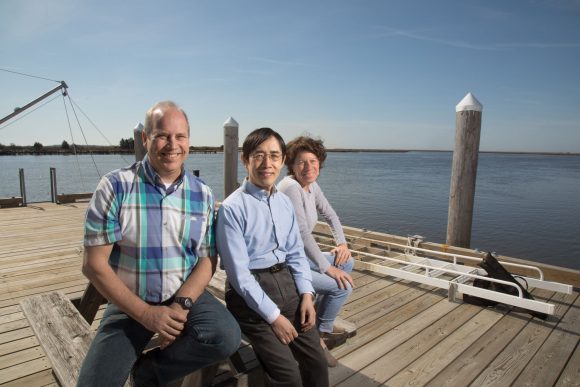 If New Jersey’s 720,000 acres of farmland are enough to classify it as the Garden State, what do we make of its 120 miles of coastline, 420 miles of open estuary and bay waters, and 661,000 acres of freshwater wetlands? Thanks to the efforts of several Rutgers researchers and extension specialists at the Haskin Shellfish Research Laboratory, aquaculture—in this case, breeding and farming shellfish—just may be the new frontier

TO MARKET, TO MARKET

Breaking into the oyster and shellfish market in New Jersey is a difficult feat, explains Lisa Calvo, aquaculture extension program coordinator. First, aspiring oyster farmers need to gain access to a harvesting area, which is impeded by the fact that the state’s current system is a leasing program with many of the leases already spoken for—especially in waters that are deemed to be of high enough quality for harvesting.

Provided that the harvester can secure a lease in a safe area, there’s a whole series of permitting that needs to take place from up to nine different agencies (“There are a lot of hoops to jump through,” Calvo says, “and it’s not an easy thing to do.”). Plus, there’s a bit of a public relations problem that shellfish aquaculture faces in that it doesn’t conjure up the bucolic images that field farming does.

But shellfish farming may be on the precipice of a reputation turnaround, since it’s one of the most environmentally friendly food production systems in the world, Calvo says. “Shellfish filter water, so they cycle nutrients to bottom systems,” she explains. “Their shells provide excellent habitat for other critters to settle on, and that’s important for the ecosystem. And, even though aquaculture is happening in a contained system, the oysters are placed in cages in the open bay so there are no antibiotics, and all you’re doing is protecting the young oysters from predators and maintaining them in a way that they have room to grow and be consistent in shape, size, and quality.” That consistency gives them high value in the marketplace, she notes.

In order to apply Rutgers’ expertise to this burgeoning market, Calvo and her colleagues have invested significant time into working with state and local officials, agency stakeholders, and shellfish growers to address current policy barriers. The result? New bills signed into law that streamline state rules for aquaculture farming and aim to create a one-stop shop for project permits. But there is more work to be done.

To that end, Calvo also has a proposal pending which would assemble a team of researchers and policy analysts to examine some of the regulatory barriers faced by local shellfish farmers. She currently hosts a bimonthly forum for growers, which brings in all kinds of experts who can help their businesses, from regulatory authorities to scientists to business consultants. And, recently, the team is examining the possibility of cultivating surf clams in Barnegat Bay. While oysters typically grow during the warm summer months, surf clams can grow during the winter which would allow for more active growing and fishing months and help farmers keep their staff year-round.

“It’s a positive trajectory, but there’s work to be done,” Calvo says. “We are bringing as much science as we can to bear on these critical issues.”

In the 1950s, local fishermen concerned with overharvesting approached the university to help assess oyster populations. At that time, Harold Haskin, for whom the laboratory is named, decided on a 40 percent rule: essentially, if farmers pulled in a harvest with fewer than 40 percent live oysters, it was time to stop. Today’s system, also informed by Rutgers population assessment, is a bit different.

“We have what we call a total allowable catch, or fixed quota, and once that number is caught by however many fishermen are active, they have to stop,” explains David Bushek, director of the lab. “This means that it’s in everyone’s best interest to increase the overall population of oysters, because it would raise the quota.”

One way Rutgers helps boost populations is through partnering with farmers to return the shells back to the water, which helps put these crucial habitats back into the environment where more can grow. But another way is through breeding, both for disease resistance and for better meat quantity.

According to Ximing Guo, professor of shellfish genetics and breeding, just two diseases—MSX and Dermo—could wipe out up to 90 percent of oysters. Dermo, in particular, is a concern since warming waters and milder winters could move this southern-based disease up the coast. So far, two new oyster strains have been bred at Rutgers to address these diseases, and further genetic improvement is constantly underway. “Breeding for disease resistance is a big part of the program,” says Guo. “But the other part is trying to breed an oyster that can grow faster and meatier.”

The way that breeders have done this is by developing oysters that have three sets of chromosomes—called triploids—rather than two sets, as they are found in nature. The triploid was invented by Standish Allen while he was still a graduate student in the late 1970s (he came to Rutgers in 1988 and is currently on the faculty at William & Mary). The advantage of triploids, explains Guo, is that “they are sterile, so they use all their energy to grow instead of using energy to reproduce.” The result is a meatier oyster in the summer when, otherwise, they’d be thin and watery after reproducing. “So that’s a great thing for oyster farmers,” says Guo, and indeed, most oyster bars today prefer a triploid. And, because the triploid is infertile, it doesn’t have the capability to replace the wild stock.

Haskin Lab researchers took this one step further to develop a tetraploid oyster, which contains four sets of chromosomes. This variant is fertile and, when crossed with a regular oyster, can actually produce an infertile triploid. “This was a whole new way to make a triploid,” explains Guo. “The next step was merging these two technologies—disease resistance and meat quantity. Today, oyster farmers are using a disease-resistant triploid that can survive better and grow faster.”

WHO OWNS THE WATER? 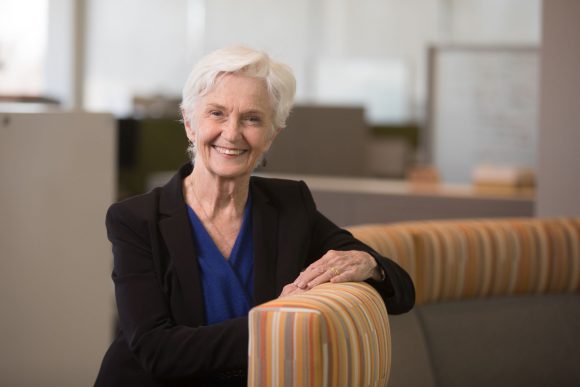 In America, the public trust doctrine dictates that the government has an obligation to manage certain natural and cultural resources—including, for many states, coastline and tidal waters—on behalf of the people, regardless of private property ownership. According to Bonnie McCay, professor emerita and Board of Governors distinguished professor in the Department of Human Ecology, this doctrine actually grew out of battles between New Jersey and New York oystermen over who controlled the waters. “In the 19th century, people imagined New Jersey being one great oyster farm because the conditions seemed to be perfect for it: the natural conditions were good, and we had this huge population of shellfish eaters nearby that would provide markets for this,” she explains. “It didn’t quite work out that way.” The technical problems associated with transplanting oysters to New Jersey were just the beginning. Wars and raids between the planters who wanted private property control and the wild catchers put a clear damper on the imagined oyster paradise. The good news? “That’s really the basis of public rights to the beaches and fishing,” McCay explains, “and the constraints that exist on property owners to claim ownership of beaches and water.” Oyster Wars and the Public Trust is one of three books authored by McCay on the ownership issue.