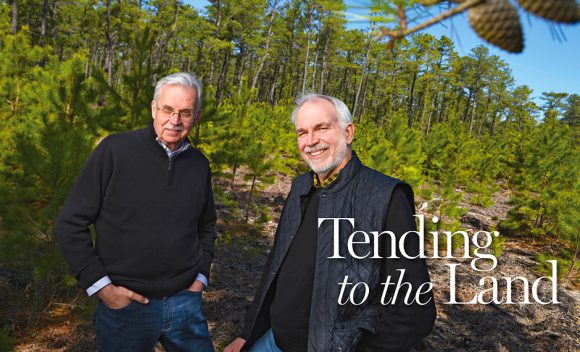 Alumni Bill Haines Jr. and Bob Williams—one the owner of an expanse of acreage in New Jersey and the other a talented forester—provide a model for the stewardship of the state’s forests. Photo: Nick Romanenko

On a wet March morning last year, Bob Williams is bumping his pickup along a dirt road through one of the private forests whose health he monitors when he spots a patch of pines needing treatment. But what it needs is what the weather precludes: fire. “This is ready to burn now,” says Williams CC’75, pointing to the brambly underbrush that is nuzzling the ankles of the trees like ground fog. “We’d be burning today if it weren’t raining.”

The forest belongs to one of his Rutgers classmates, Bill Haines Jr., whose Pine Island Cranberry Co., the largest grower in the state, sprawls across three townships in Burlington County between the east and west branches of the Wading River. But of Pine Island’s 14,000 acres—dimensions more familiar in Texas ranch country—only 1,400 are cultivated as cranberry bogs. The rest is woodland, a buffer to protect the supply of pure water essential to cranberry growing. And under the care of these two classmates over the last 17 years, it has become an inviting enough habitat to host the first wild quail known to be born in New Jersey since the 1980s.

Haines’s great-grandfather—Martin L. Haines, a captain in the Union Army during the Civil War—started growing cranberries in 1890, and each generation of the family has expanded the operation. “Whenever we got an opportunity to purchase land upstream we did, and have never sold it,” says Haines CC’75. Some of his grandchildren, the sixth generation, live on the property now, the kind of long-term relationship with the land that leads to long-term planning.

“This is about the next generation,” says Haines, giving an example. “When you renovate a cranberry bog, it’s out of production for at least four seasons. If I was the only one doing this and my time horizon was my lifetime, then we wouldn’t do that. My dad did the same thing. He knew that he was never going to see the benefit directly of what he was doing, and it’s the same for me. But that’s what we grew up with.”

That was until he met Williams, a certified forester who was working with a neighboring cranberry grower. Haines and Williams had both studied with professor Benjamin Stout GSNB’67 (“He made me who I am as a forester,” Williams says), but the two men didn’t know each other at Rutgers. Williams had grown up in Glendora, in Camden County, and spent his happiest days in what he called “the deer woods.”

“That’s what we all called it, not the Pinelands,” Williams says. His father helped build the Glendora Buck Club in Chatsworth, the nearest settlement to Pine Island Cranberry, and spent every deer season there until the year before he died, at 90. “He started bringing me here when I was 5. And I ended up working in the forest that in my childhood was a part of my life.”

After a post-Rutgers stint in the Pacific Northwest, Williams has been working in southern New Jersey for the last 25 years, hired by landowners who want to know the best way to care for their forests. He manages almost 150,000 acres, drafting forest management plans, advising on where and how much to cut, where and what to plant, and where and when to burn. Haines became one of his clients in 2000.

“See how the grass is coming out of the burn? You come down here in July and it will just be a lush green,” says Williams, passing a stretch where the lower trunks of the pines have scorch marks like the crust of a brick-oven pizza and where the ground has been swept clear. “The fire is as important to this forest as the rain and the sunshine. People don’t understand that.”

Fire that is deliberate and controlled, that is. In much of New Jersey’s forests, though, shaggy and not tended the way his forests are, he sees trouble looming. “We’re going to have a bad fire in South Jersey if something isn’t done. We’re going to be on CNN for days,” Williams says. “The whole thing in New Jersey is, they’re great at buying and preserving land, but they’re not so great at taking care of it.”

Haines was honored in 2012 by the New Jersey Department of Environmental Protection for his stewardship of his forest, which New Jersey Audubon chose as the location for an ambitious project to restore the northern bobwhite quail to a state where it has been functionally extinct.

“They decide what’s best to do with the quail, and I essentially provide the use of the hall,” says Haines, a former mayor of Washington Township and Burlington County freeholder. He hadn’t seen a quail on his land for decades, until the first 80 were trucked up from Georgia in 2015 and released with radio collars.

“Over the years of them implementing that forestry plan, it created this incredible quality habitat,” says John Parke, stewardship project director for the north region of New Jersey Audubon and a part-time lecturer at Rutgers. “When we go through these forestry cuts that Bob has done, the agriculture that Bill’s doing, I have seen the most amazing species at quantities that are off the charts, and that’s a testament to active management.”

Eighty more quail were released in April 2016, and 66 of the eggs laid by the initial group in 2015 hatched. This year was the third release of 80 birds.

“See how open that forest is,” Williams says, stopping near one of the spots where the quail were released. It had been thinned, a mixture of tall older trees and short young ones. “They’re ground birds, and they need openings with sunshine. This is just what they like.”

This article by Kevin Coyne originally appeared in Rutgers Magazine.