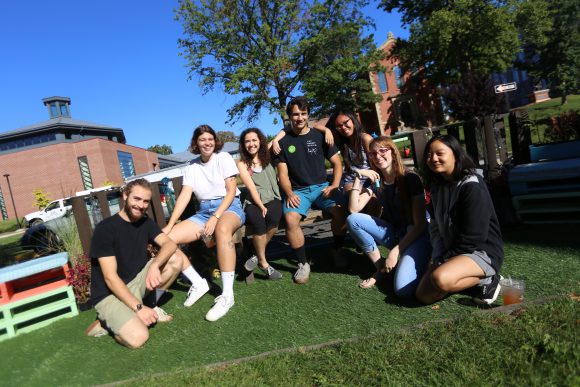 On September 15, the Rutgers Landscape Architecture Club hosted its annual PARK(ing) Day event on Seminary Place at Rutgers College Ave Campus. By 7:30am, two parallel parking spaces had been transformed into a green space filled with a mixture of lush, woody and herbaceous plants. Wooden pallets were repurposed into benches and walls were placed within the foliage. Recycled bottles and paper ornaments hung from a frame, ready for passersby to take a moment to sit and enjoy the warm, sunny Friday.

As the day progressed at the Rutgers PARK(ing) Day event, the spaces on Seminary Place filled with a variety of programs ranging from meditative yoga to Zumba. During the lulls between the programs, the parklet’s giant bubbles, sidewalk chalk and drums attracted students and professors as well as parents and their children who promptly stopped to play.

This year was the first time the Rutgers Landscape Architecture Club has hosted this event on campus.

PARK(ing) Day has become a day of celebrating green open space, but also an opportunity to challenge how public open spaces are used. By 6p.m. the parklet once again became a vehicular parking spot, as its original designers intended. In the future, public green spaces may triumph over the car but for now it will remain a readily available parking spot, until next year.