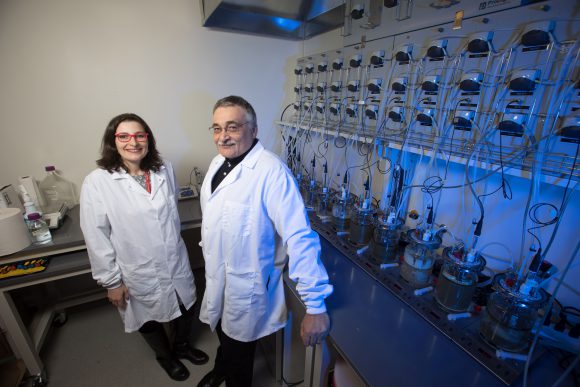 According to the Centers for Disease Control and Prevention (CDC), more than one-third of American adults are obese and about 17 percent of kids are obese—that’s about 12.7 million children and adolescents nationwide. Further, as of the CDC’s last count in 2016, more than 29 million Americans are living with diabetes, and a whopping 86 million have prediabetes.

At SEBS, the Institute for Food, Nutrition, and Health (IFNH) is leveraging the university’s expertise in a variety of areas—100 members from 28 departments to be exact—to put the latest research to work in the service of these and other health problems at the forefront of our society. And its newest addition, a technology called SHIME, has the capability to completely transform researchers’ understanding of the human gut and its impact on such diseases.

Short for Simulator of Human Intestinal Microbial Ecosystem, SHIME is a sophisticated piece of technology that recently found a home at the IFNH. On lease from a Belgian company called ProDigest, SHIME is a platform for studying microbial, physical, and chemical processes in the gastrointestinal (GI) tract.

“It’s as close as you can get to mimicking the actual conditions in the human gastrointestinal system,” explains Michael Chikindas, director of the IFNH Center for Digestive Health and professor of microbiology in the Department of Food Science. Specifically, researchers can mimic conditions in the stomach, small intestine, and colon, while controlling various parameters from pH to temperature. Experiments and controls are run side by side, and researchers can monitor changes in real time as they happen.

What this means is that SHIME can minimize or eliminate the need for animal studies and, because it is so similar to what’s observed in human subjects, it can help researchers move projects quickly from lab to human clinical trials. The result? The kind of research that can make a difference in people’s lives.

For example, SHIME enables researchers to study drugs like they never have before, by looking at the efficacy of different drugs in the GI tract and seeing the real life kinetics of drug delivery throughout the system and whether it’s stable along the way. They can see if and how different substances influence and impact the gut and whether those impacts are positive or negative. And they can see how natural products can enhance the activity of already existing medical formulations.

The implications for human health extend to understanding the changes in microbiota that occur when the body is disordered in some way, for example, when the body experiences obesity or diabetes. “We are planning to study the influence of plant-derived bioactives on the gut microbiota of preschool children with a predisposition for obesity,” explains Chikindas, using something called Baby SHIME, which mimics the gut microbiome of children from infancy on. “If we can modulate the gut microbiota in scientifically sound ways in children who may become obese, imagine the potential impact for future generations,” he adds.

Further research can inform IFNH scientists about how the gut may impact diabetes and Crohn’s disease—the list is endless because SHIME is so flexible that it can mimic the microbiome of a range of subjects including healthy and disordered adults, children, and even animals.

Chikindas and Maria Falduto, a postdoctoral associate at the IFNH, both received intense training from ProDigest in Belgium and at the IFNH labs in order to use this new technology. Now, they are looping students in on the action, with four currently working with the SHIME system. “Rutgers is a research university, and the important thing about research universities is that students are learning not only in the classroom, but also through actual participation in a variety of research projects from the undergraduate through graduate level,” says Chikindas. Hands-on education—a proud Rutgers tradition.