Final exams, balancing work and play, and living away from home for the first time are just a few of the challenges common to college life. However, the students on these pages represent some of the strongest of our graduates: the ones who faced additional hurdles—from paying for college on their own to navigating life as an immigrant to taking on colossal home life responsibilities—and rose to meet them. Cheers to them, and to the whole Class of 2017. 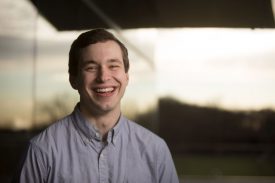 Brayden Donnelly started reaching out to School advisers nine months before he even arrived on campus. Having gone through the transfer process once before—transferring from the University of Rhode Island to Brookdale Community College—he knew he needed to get his ducks in a row if he wanted to graduate on time with a degree in environmental policy, institutions, and behavior. What he didn’t know was that his diligence would actually enable him to graduate early.

A bonus of his early graduation is that he also has a head start on his career, having landed a position overseeing the design and voice of internal and external communications for a green building consulting firm.

“My father is a park superintendent, so I spent my whole life in parks and camping on the weekends. My job is about taking the passion I have for the environment and bringing it to the urban age,” he says. “This is about taking my major and combining it with technical skills to communicate its importance to a wider range of people.” 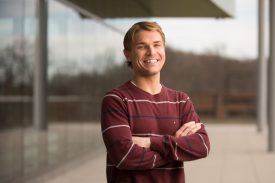 Holding a job, keeping up with extracurriculars, and building a resume are typical distractions for most college students. But Kevin Tveter had an additional responsibility, and one that could have derailed his studies: being the full-time and primary caretaker of his mother, who suffers from chronic illness. He’s responsible for her daily care, which includes everything from driving her to doctor’s appointments to grocery shopping for the household. It could have been a roadblock for him. “It’s the mental stress of worrying about your parent while you’re at school,” he says of the challenge. “But it’s also the stress of the time commitment it takes away from my studies.”

Indeed, today he works in a lab at the Rutgers Institute for Food, Nutrition, and Health, studying the effects of grape polyphenols on metabolic syndrome. “No matter what sets Students 05 explorations Photography by John O’Boyle, Nick Romanenko, and Matt Rainey. Photography courtesy of Brayden Donnelly, Amber Betances, Breanna Robles, Ankita Gupta, and Naomi Watkins-Granville. Kevin Tveter Amber Betances Breanna Robles Granville Ankita & Bella Gupta Bra Brayden Donnelly Kevin Tveter senior snapshots discovery.rutgers.edu 06 Photography by John O’Boyle. me back, I use it as fuel to do better and persevere,” he says. “We all have obstacles. You can careen into them, but you can also get up and maneuver around them. 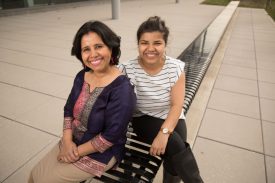 When she moved to America at age 16, Ankita Gupta, a self-described extrovert, thought her new high school wouldn’t be so different from the one she left behind in India. “My mom and I traveled a lot, so I thought it would be easy, but I had a harder time adjusting than I expected,” she says. “First, I had a hard time making friends. But the education system was different, too—in India, it’s very theoretical. Here, it’s more practical; for example, we didn’t have labs. So it was a challenge.”

When she decided to come to Rutgers, she also decided to start with a clean slate. And she parlayed her love of animals—one that took root in India, where she cared for stray dogs—into an animal science major and a goal of becoming a veterinarian. Beginning in her first year, she started working in the lab, contributing to several projects and even authoring a study that’s been submitted to a peer-reviewed journal. This fall, she’ll take her pick of veterinary schools. “I had this idea that researchers are isolated in a lab all day,” she says. “But my mentors in this department showed me that I want to be a veterinarian but also pursue research as well.”

This story gets even better. Mom Bela works at Rutgers as a library associate, going to graduate school part-time. Both she and Ankita graduate in May 2017. 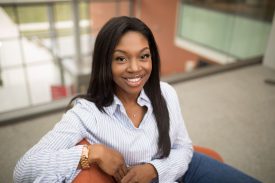 Naomi Watkins-Granville, biology major, always found the term “full-time student” to be ironic: “I am a full-time student,” she says, “but I’m also a 15- to 20-hour-a-week employee.” Holding down two jobs while balancing a full-time course load was rough, but this aspiring doctor let a goal-oriented philosophy guide her time: “If I needed to spend time away from the books and working, I wanted to make sure that the time I was spending away from school was going to help me in the future by being tailored to my career goals or major.”

For three years—first year through junior year—she worked at a local New Brunswick hospital, and during her senior year, she landed a job at the Sea Level Research Lab in the Department of Marine and Coastal Sciences. All the while, she also worked as a biology tutor and mentor for low-income and first-generation students. By her senior year, she became the academic coach, which entailed overseeing all the biology tutors, holding office hours, hosting weekly study groups, and offering round-the-clock support in a subject many students find difficult.

“I think these students just need someone to tell them they can do it—I know I did,” she says. “I struggled a lot in college but I made it. I know they have a lot of doubt being here, but to see someone who’s done it and comes from the same place as they did is really important. At the same time, it reassures me of my capabilities so I can enter my next chapter with confidence.” 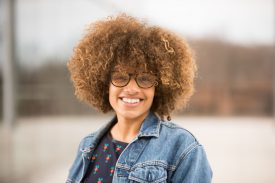 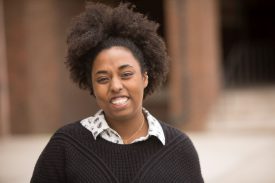 Amber Betances and Breanna Robles had just finished their junior year in the Department of Landscape Architecture when they each received an interesting email: the department was launching a new joint undergraduate and graduate program that would enable students to earn both a bachelor’s and a master’s degree in landscape architecture in five years of full-time enrollment, rather than the normal six. Would they want to apply? It didn’t take much time for them to decide the answer was yes.

“We were two of three students to come from the undergraduate program into this new track,” Betances says. “There were some growing pains as we got used to the graduate-level classes, and our professors and advisers wanted a lot of feedback along the way.”

Both students credit their existing relationships with faculty with helping them get through the challenges of being the first students in a new program: “We had such a great support system in each other but also in the professors,” Robles says. “We had a history with them, so it was great to be able to go into their offices and talk things out, even if we didn’t have a class with them that semester.”