Editor’s Note: This article was originally published in The Press of Atlantic City. 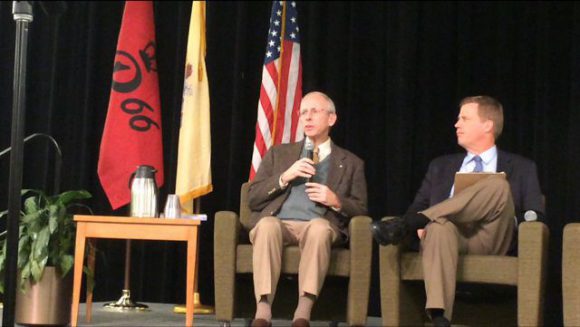 Associate professors Daniel J. Van Abs (CC’77) and Karen M. O’Neill, Department of Human Ecology, are co-editors of a book on the aftermath of Sandy called “Taking Chances: The Coast After Hurricane Sandy” and were part of a panel at Rutgers University’s “Taking Chances” symposium held October 28 at the Livingston Student Center in Piscataway, NJ.

The panel discussed how vulnerable coastal communities are to storm-related destruction and that these vulnerabilities will only increase in the future. Rather than just rebuild “bigger and better” in the same place, society need to look realistically at the risk of building on the coast. “Unless you are willing to recognize risk, there is no particular incentive to take action,” said Van Abs.

Rutgers Scientists have predicted a likely 1.5-foot sea-level rise by 2050. This would drown many of the wetlands that help provide protection against storm surges which would leave roads and utilities under water much of the time in some places.

Politicians haven’t considered ways to deal with storms other than rebuilding, which, as we pass the fourth anniversary of Superstorm Sandy, is still ongoing. The panel recommended looking at ways to work collaboratively on a regional level to plan for moving residents out of the most vulnerable areas.