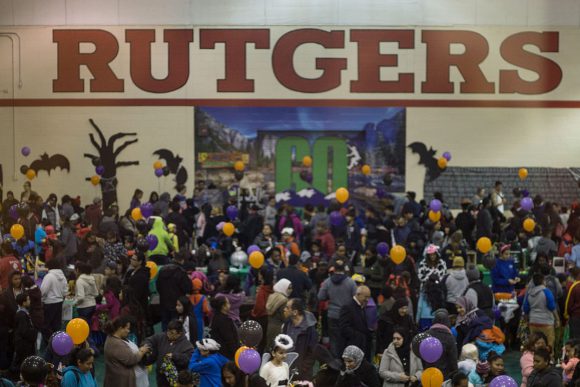 On October 28, more than 2,000 children and their parents attended the 13th annual Monster Mash, a safe Halloween alternative to trick or treating dedicated to children in the surrounding New Brunswick and Piscataway areas. 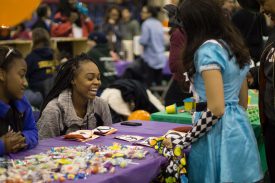 Monster Mash is held the Friday before each Halloween, a night dedicated to spooky fun and candy-grabbing. For those who also go trick or treating, Monster Mash is a second night for families to enjoy Halloween festivities, giving parents a slight break from routine and their children another reason to wear their costume. And what kid wouldn’t want that?

The doors to Monster Mash opened at 6 p.m. Kids in costume were ushered in past a row of tables before they were given free reign over the assorted games and prizes littering the Cook/Douglass Recreation Center’s gymnasium. Entertainment occupied the evening as the Livingston Theater Company took the stage first to perform songs from their production “Little Shop of Horrors”. Later, audience members were given a chance to compete against the Rutgers mascot in a mummy wrap contest. Student hip hop artist, Kennedy, also took the stage to perform. Next, kid’s had the chance to get into character as they competed in a costume contest. To finish the night, event participants did a jig to the Monster Mash dance. The doors to Monster Mash closed at 9 p.m.

“This is a great philanthropic event for the city of New Brunswick and Piscataway. It’s a safe alternative to trick or treating, and this experience exposes children to Rutgers early on to hopefully encourage them to pursue college,” said Cousin. 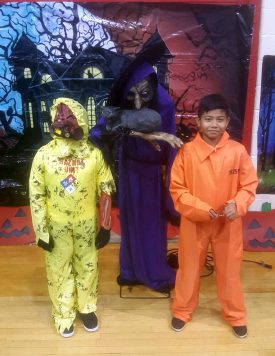 Kids dressed up as all kinds of characters, such as Starlord from Guardians of the Galaxy, a prison inmate and a hazmat survivor. Over 90 student organizations were present with homemade games to play and candy to give away. For some organizations and volunteers it was their first year attending Monster Mash, including executive director Dan Morrison.

“As a first time participant, I was impressed with the scale of Monster Mash. The sheer number of student organizations, volunteers and children/families participating was thrilling. I loved that my team in Cook-Douglass could have such a great impact on the greater community,” said Morrison. 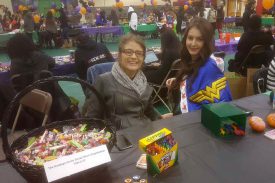 “The kids are ridiculously adorable”, said Catherine Henderson, a first year volunteer representing the Undergraduate Social Work Organization. It was also the organization’s first year participating in the event, as part of an effort to conduct more community outreach for the city of New Brunswick.

Another member of the organization, Blerta Baholli, came to Monster Mash last year and because it was so much fun, urged her fellow social workers to volunteer.

“Kids get a trick and a treat, and the color scheme is perfectly Halloween,” said Baholli.

Many volunteers hear about Monster Mash through either word of mouth, social media or the Office of Fraternity and Sorority Affairs. Students and staff may volunteer for next year’s Monster Mash at the RU on campus website http://ruoncampus.rutgers.edu/2016monstermash/.

“Rutgers students use a lot of New Brunswick resources. This is giving back by providing a safe space for children to trick or treat,” said Suzette Cintron, member of the Spanish sorority Sigma Lambda Upsilon. “We heard about the event through the Office of Fraternity and Sorority Affairs,” said Cintron. This was her sorority’s first year participating. Her co-volunteer, Mecca Mosley, said it definitely put her in the holiday spirit. When asked what their favorite Halloween costumes were when they were kids, Suzette said Tinker Bell and Mecca said she loved her complete Bugs Bunny bodysuit. 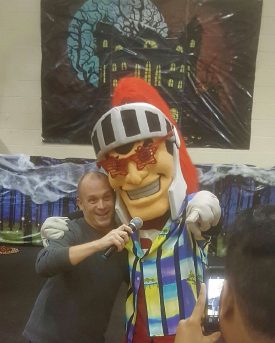 Bill Lynskey and the Scarlet Knight. Photo by Samuel Lucescher.

Some organizations that were present and the games they played include:

Society of Animal Science: Put Skelly back together

There was a spooky presence drifting in through the double doors of the Cook/Douglass Recreation Center, bringing members of many different neighborhoods under one roof to enjoy a holiday that excites and delights us. For a time, children were able to become a beloved character whose poster may adorn their wall. Magic is real during the month of October.

“It was great to see the little kids with big bags of candy and to see all of the families, that’s what it’s all about,” said Cousin.

Residence life is currently “studying ways to potentially expand Monster Mash so the crowd has more room to spread out,” said Morrison. The residence life team is interested in finding other ways to support the greater community, but nothing has been revealed just yet.