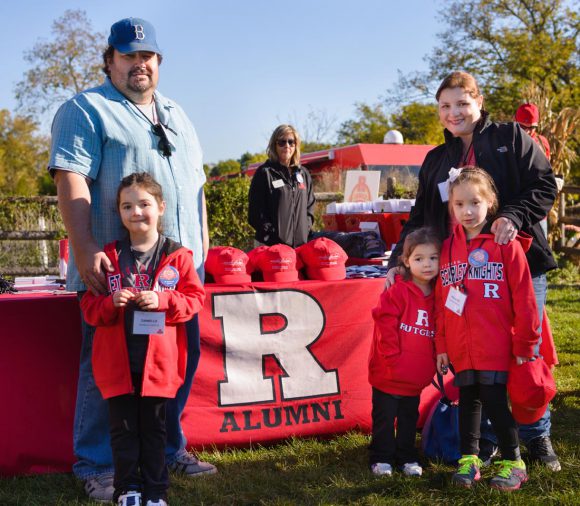 Editor’s Note: this story appeared as a Rutgers Today Feature.

Elaine Griffin (DC’01) and her family were among other alumni and their families who enjoyed the R Family Fall Festival, held at the president’s residence before the Rutgers University Homecoming football game.

Over the past three years, Rutgers alumni with young children, like Griffin, have enjoyed what has become a beloved Homecoming tradition: tailgating as a family in the shadow of High Point Solutions Stadium in a safe environment.

The festival was launched in 2014 when President Robert Barchi and his wife, Francis, brought their concept of a family-friendly, alcohol-free Homecoming event to the Rutgers University Alumni Association. They suggested the lawn of their residence as the ideal location because it is a contained area close to the stadium but tucked away from the more boisterous environment in the parking lot.

Throughout the grounds, families mingle, enjoying seasonal food, arts and crafts, carnival games and animal attractions such as pony rides and a petting zoo sponsored by the School of Environmental and Biological Sciences (SEBS).

“Having animals at the festival is a great way to reach out to the community,” says Felicia Kleiman, senior research animal worker at SEBS, as she helps children catch a glimpse of the zoo’s star attraction: 3-week old piglets named Fiona, Ivy, Sprinkles and Porcelain. “Kids who are here today could be tomorrow’s veterinarians or doctors. It allows them to learn more about our animal science program.”

Donna Thornton, vice president of alumni relations, annual giving and communications, says many young alumni have told her how much they appreciate being included in an event geared to their stage in life. “Being ‘Scarlet Forever’ is about family – and it’s a family that extends beyond your years as a Rutgers student,” she says. “It is a lifelong family that is always there for one another.”