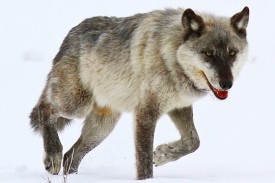 This wolf, known as 755 and the object of study in Yellowstone National Park, was shattered when humans killed his brother and mate. His new mate was then killed by his jealous daughters, who attracted hostile males that he couldn’t handle. Once a proud alpha male, he was desolate.
Photo credit: Alan Oliver

Note: This article first appeared in the Winter 2016 issue of Rutgers Magazine.

Years of studying animals at sea and on land convinced scientist Carl Safina that many creatures in nature think, express emotion and communicate. In his new book, Beyond Words: What Animals Think and Feel (Henry Holt and Company, 2015), Safina GSNB ’82, ’87 couples personal observations of wildlife with the best field research available to create a thought-provoking portrait of the distinct and complex lives of animals.

For the project, Safina, who earned a Ph.D. in ecology from Rutgers, visited elephant herds at Amboseli National Park in Kenya, wolf packs at Yellowstone National Park, and orca pods in the Pacific Northwest. A clear pattern emerged. These animals know who they are, he says. “We have the same imperatives: take care of our babies, find food, try to stay alive.”

“They know who their family and friends are. They know their enemies,” Safina explains in the book’s prologue. “They make strategic alliances and cope with chronic rivalries. They aspire to higher rank and wait for their chance to challenge the existing order. Their status affects their offspring’s prospects. Their life follows the arc of a career. Personal relationships define them. Sound familiar?”

Beyond Words contains insightful examples of animal behavior. There’s the study in which elephants in the wild distinguish between the voices of tourists (who seldom cause them any harm) and herders (who hunt them); the description of a wolf pack descending into chaos after the alpha female strays out of Yellowstone and is shot dead by a hunter; and multiple instances in which dolphins and whales that become tangled in fishnets go limp until they are cut free, then thank their rescuers before swimming off.

Safina had convincing evidence of animals’ ability to think even be­fore leaving his Long Island, New York, home. As he explained during a recent TED talk, “whenever my dog ambles up from the rug for a belly rub, she has the thought, ‘I know I can go over to Carl; he will understand what I’m asking. I know I can trust him because we’re family. He’ll get the job done, and it will feel good.’”

“We are kin under the skin,” Safina says of the living beings with whom we share the planet. “Their brains are basically the same as ours. The same hormones that create mood and motivation in us are in those brains as well. It is not scientific to say they are hungry when they’re hunting and they’re tired when their tongues are hanging out, and then say we have no idea if they can possibly be experiencing anything when they’re playing with their children and acting joyful and happy.”

Many behaviors we consider uniquely human are in fact shared with some other species. For example, elephants grieve and stand vigil when a family member dies. Killer whales spend years teaching their young how to hunt seals by surging through the surf onto a beach that could strand and kill them. Adult wolves sometimes break the rules by mating with wolves from an unfamiliar pack. In other instances, an animal exhibits more advanced behavior than humans. Elephants, for example, are virtually never violent to one another, especially within the family. 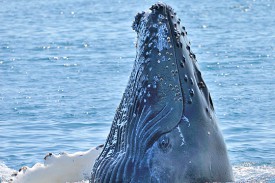 When a mortally ailing young humpback whale drifted ashore on Long Island, New York, the lighthouse keeper 15 miles away in Montauk, on the eastern end of the island, heard “incredibly mournful sounds,” as if a distressed mother was searching for, or mourning, her lost child. Photo credit: Carl Safina.

Sadly, Safina has identified a dark trait exhibited only by people: “Humans are the only species that has ever caused global problems. We clearly create worldwide problems that we have so far demonstrated an inability to tackle,” he says. “Humans are clearly the most destructive species and the worst thing that’s happened to every other living thing. We are like spoiled children throwing a tantrum in our refusal to apply any limits to  ourselves.”

Safina, who grew up in Brooklyn, traces his interest in and curiosity about animals as far back as he can remember. His father, a high school teacher of students with mental disabilities, bred canaries in the family’s apartment, so there were “always birds singing.” At age 7, Carl convinced his dad to let him raise homing pigeons in a shed out back. “But the best nature in Brooklyn is experienced when you step onto a boat,” he says, recalling frequent fishing trips off Coney Island. Later, when he discovered some species were in peril, he felt called to stand up and prevent their destruction.

“We cause so much pain to them. The mystery is, why don’t they hurt us more than they do?” says Safina, a marine ecologist whose ocean conservation work has been recognized with MacArthur, Pew and Guggenheim fellowships. “If we want to carve elephants’ teeth, can’t we wait for them to die?”

For this book, Safina, the first to hold the endowed chair for nature and humanity at Stony Brook University on Long Island, set out to do what he loves best: see what animals are doing in the wild and ask why they are doing it. He hadn’t been in Kenya long, however, when renowned researcher Cynthia Moss, who has spent more than 40 years observing African elephants, suggested that he think about animal behavior differently. As a result of their conversation, he quit asking, “How are they like us?” and began asking, “Who are they?”

“We are not the measuring stick for their lives,” Safina says. “By asking, ‘Who are they?’ not ‘How are they like us?’ you get a deeper and much fuller and much more real and more astonishing appreciation of this living world we so terribly don’t appreciate.”

Science doesn’t encourage this type of inquiry. Like virtually all graduate students, Safina was taught not to anthropomorphize animals. It’s a premise with which he wholeheartedly disagrees. Ascribing human feelings to animal behaviors “is the best first guess about understanding what an animal is doing,” he says. “If an animal is acting fearful, your best guess is that it feels afraid. If it’s playing with its babies, it’s having fun. That’s a really good first guess. For the most part, it gets you the right answer right away. Then if you keep watching, you have a better chance of confirming that answer or realizing you might have been mistaken.”

Invariably, similarities to humans emerge in the researcher’s stories of animal joy, grief, jealousy, anger and love, and that can lead people to an uncomfortable place. “If you acknowledge that they feel and want to stay alive, that makes it harder to do anything you want to them”—like trophy hunting, animal research, and factory farming, says Safina. “You have to consider their feelings and their experience. That is not very convenient for most of us.”

Safina, whose earlier work helped influence sustainable fishing and marine conservation policies, leads the Safina Center, a nonprofit based at Stony Brook University that is dedicated to improving the relationship between people and wildlife through science, education, and conservation. Among the center’s early projects was developing the seafood rating system adopted by the grocery chain Whole Foods to guide customers to sustainable food choices. He also teaches a graduate-level course in marine conservation and ecology.

Safina’s writing and lecturing are part of the center’s mission “to inspire a deeper connection with nature and the motivation to act.” Personally, he hopes people will reexamine their relationship with other animals, act more kindly and more compassionately, and recognize others’ equal right to exist. He has written seven books, appears frequently in print and on the radio, and hosted a 10-part PBS series, Saving the Ocean. Safina is also popular on the lecture circuit. His most recent TED talk, for example, had 658,000 views in its first weeks.

Asked whether he is optimistic or pessimistic about his message getting through, Safina says: “Being optimistic or pessimistic is an option for the people who are sitting in the seats watching the game. The people who are on the field have to simply play as hard as they can and try to win. Everything I do is geared to helping facilitate the continued existence of viable life on Earth.”