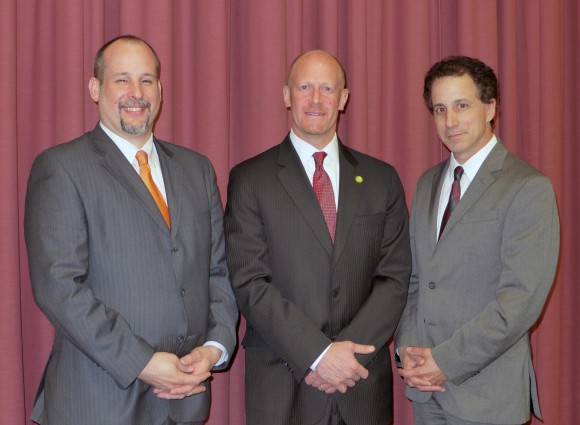 Six graduates of the School of Environmental and Biological Sciences (and its predecessors) were honored with alumni awards for outstanding achievement at an annual luncheon and celebration on April 26, 2015, at the Cook Student Center.

The honorees receiving the George Hammell Cook Distinguished Alumni Award, given to those with undergraduate degrees from the school, are John W. Jengo, David Q. Rich, and Richard C. Wolff. Winners of the Dennis M. Fenton Distinguished Graduate Alumni Award, given to those whose graduate degrees were earned in school-based programs, are Margaret Brennan-Tonetta, Jennie C. Hunter-Cevera, and Cynthia Rosenzweig.

The George H. Cook Distinguished Alumni awards and the Dennis M. Fenton Distinguished Graduate Alumni awards are organized by the Cook Community Alumni Association. The Cook award was started in 1976 and the Fenton award in 2003. George Hammell Cook was instrumental in bringing Rutgers the designation as New Jersey’s land-grant institution in 1864. Dennis M. Fenton (GSNB ’77), was executive vice president of Amgen, Inc., and a strong supporter of and donor to the school and Rutgers.

John Jengo received his bachelor of science degree in geology in 1980 and is the principal hydrogeologist with MWH Americas, Inc. His nomination statement notes that he “is an accomplished hydrogeologist and project manager and has spearheaded geologic and environmental investigations at some of the most infamous and contaminated sites in and around New Jersey.” He also has taken a leading role in the removal of three dams on the Raritan River, which in turn opened up the waterway to migratory fish. He has conducted numerous other environmental and river cleanup projects. In his acceptance comments, John cited his undergraduate experience’s “ethos and ideology that was ahead of its time,” which greatly influenced the direction and impact of his work. “I chose the right school at the right time and place,” he said. His advice to today’s students: “It is possible for any one person to bend the arc of change to achieve a better world.”

David Rich received his bachelor’s degree in public health in 1994 from Cook College, his master of public health degree in 1999 from the University of Medicine and Dentistry New Jersey, and his doctor of science in 2004 from Harvard University. He is an associate professor at the University of Rochester Medical Center and a pioneer in respiratory epidemiology, most notably in connection with the Beijing Olympics, and is a major player in international health science and public health. In his acceptance remarks, David praised his mentor Mark Robson (CC ’77, GSNB ’79, ’88, MPH 95), who was David’s advisor in the G.H. Cook Honors Program and nominated him for the George Hammell Cook award. David recalled that when he was an undergraduate, Mark was the first person to get him to think about environmental health. “As I go forward in my career, I want to have the same impact on my students as Mark has had on his,” he said.

Richard Wolff is managing director and head of the U.S. Investment Grade Syndicate Desk at Societe Generale. He received a bachelor’s degree in business economics in 1989 and an MBA in 1990, both from Rutgers. He and his family support the Against All Odds Scholarship at the School of Environmental and Biological Sciences, an award that is given to students who have faced exceptional challenges. He leads a Rutgers program known as Road to Wall Street, and he coaches basketball within his community. He recalled that as a student, he was one of a group that worked to establish Phi Delta Theta fraternity as an organization that was anti-hazing and anti-discrimination. Rutgers was very supportive of this initiative. He added: “Cook firmly reinforced the values I learned at home – giving, caring and doing the right thing.” 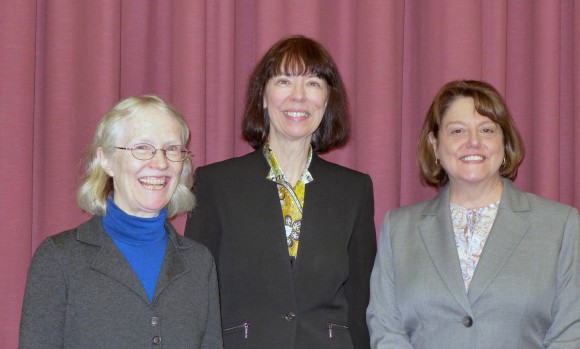 Margaret Brennan-Tonetta received her bachelor’s degree in 1993 in economics from Rutgers College, her master’s in 1996 in agricultural economics from the Department of Agricultural, Food and Resource Economics (DAFRE), and her Ph.D. in 2010 from the Bloustein School. She is Rutgers’ associate vice president for research as well as associate director of the New Jersey Agricultural Experiment Station. She was largely responsible for the creation of the Food Innovation Center in Bridgton and expanded programs at the EcoComplex in Burlington County. She was a leader in the establishment of the Rutgers Discovery Informatics Institute in Piscataway and the Innovation Park at Rutgers. She is an innovator in bringing science and business together to forms partnerships and real world solutions in the areas of food systems, energy, and technology transfer. At the awards ceremony she acknowledged DAFRE’s Morris Fabian, professor emeritus, and Paul Gottlieb, professor and department chair, who were present at the event, and noted, “The time that I spent in ag econ helped make me the person that I am.”

Jennie Hunter-Cevera was a graduate student of professor emeritus Douglas Eveleigh, recently retired from the Department of Biochemistry and Microbiology and a legend on the G.H. Cook Campus. She received her Ph.D. in microbiology in 1978, while she was employed by E.R. Squibb and Sons. Jennie noted that Eveleigh negotiated an agreement with the university that allowed her to continue working while she pursued her graduate degree. Her 25 years of experience in the pharmaceutical and biotechnology industries includes work with Squibb, Cetus Corporation, GeoBiotics, and Universal Foods. She founded the Biotic Network and Blue Sky Laboratories and spent five years as head of the Center for Environmental Biotechnology at the E.O. Lawrence Berkeley National Laboratory. In addition, she served for 10 years as the president of the University of Maryland Biotechnology Institute and was an executive vice president with RTI International. She is currently acting Secretary of Higher Education for the State of Maryland. She also is a member of the School of Environmental and Biological Sciences’ Executive Dean’s Council.

Cynthia Rosenzweig received her bachelor of science degree in agricultural science in 1980 and her master’s in soils and crops in 1983, both from Cook College. Her Ph.D. was earned in 1991 at the University of Massachusetts. Introduced as an alumna “who really is a rocket scientist,” she is a senior research scientist at the NASA Goddard Institute for Space Studies, where she heads the Climate Impacts group. Among her many connections to climate change, she is co-chair of the New York City Panel on Climate Change, which advises on adaptation of the city’s infrastructure; she co-led the Metropolitan East Coast Regional Assessment of Climate Variability and Change; she is co-director of the Urban Climate Change Research Network and was a coordinating lead author of the IPCC Working Group II Fourth Assessment Report, and much more. A recipient of a Guggenheim Fellowship, she joins impact models with climate models to project future outcomes of both land-based and urban systems under altered climate conditions. She is a professor at Barnard College and a senior research scientist with the Earth Institute at Columbia University. She commented that experiences in soils and crops prepared her well for her career, “especially working with [the late professor emeritus] John Tedrow in the New Jersey Pinelands to understand the importance of soils.” Her master’s thesis, involving the study of Mediterranean sub clover to see if it could grow in New Jersey “showed whether climate change would affect native crops” and influenced her life’s work on climate change.