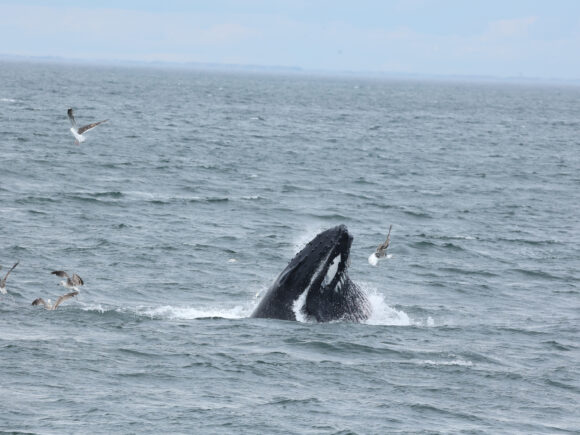 Humpback whales spotted along the Jersey Shore and the waters off New York often stay for an extended period of time and return year after year, according to a study co-authored by Rutgers University, Gotham Whale, the Center for Coastal Studies and 21 other organizations in the western North Atlantic.

In a study, published in the Journal of the Marine Biological Association of the United Kingdom, researchers found that 58.4 percent of whales spotted in the New York Bight Apex (NYBA) – the coastal area between Long Island and the New Jersey coast – were seen more than once, either within the same year or between years. The average length of stay was 37.6 days.

The results suggest humpback whales exhibit extended occupancy in the NYBA – specifically the area extending east to Fire Island, New York and south to Manasquan Inlet, New Jersey and included the New York-New Jersey harbor estuary – and were likely to return from one year to the next (a 31.3 percent average).

“This research is important for the management of these protected species,” said Danielle Brown, a doctoral candidate in the Ecology, Evolution and Natural Resources Department at Rutgers-New Brunswick and lead researcher for non-profit Gotham Whale. “The more time these whales spend in the New York Bight apex may mean increased exposure to human activities including busy shipping traffic leading into the Port of New York and New Jersey.” Long-term studies of individuals in the Gulf of Maine and the Gulf of St. Lawrence allowed for insights into the age class of some of these individuals. Most of the whales were young, often less than five years old. Young humpback whales typically return to feeding grounds further north, where their mothers take them before weaning, according to previous research.

The researchers said it isn’t clear why some whales choose to spend a portion of the feeding season off New York and New Jersey. However, they explained, their presence may be related to the consistent availability of a prey species called Atlantic menhaden. These commercially fished species have been increasing in abundance in the past decade.

According to the researchers, the study highlights the importance of long-term, dedicated humpback whale research programs, and collaborations between scientists and whale watch-based data collection programs.