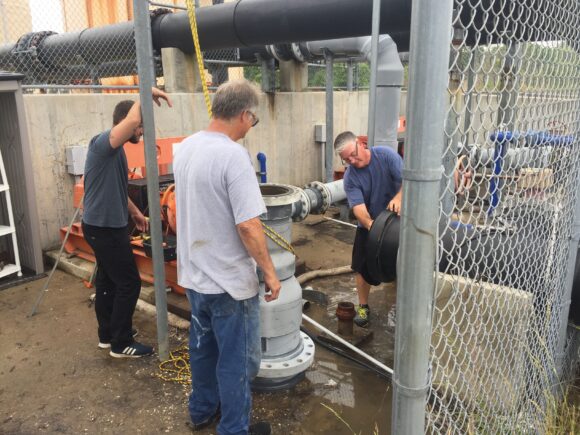 New Jersey Agricultural Experiment Station (NJAES) is a research and extension powerhouse that shares knowledge and best practices from its farms, labs, institutes and innovation hubs with residents and businesses in the state. Behind the scenes, NJAES teams are doing complex work that requires diverse skillsets, hands-on experience and keen problem-solving abilities.

The New Jersey Aquaculture Innovation Center (AIC) is an NJAES facility located near the southernmost tip of the state on the Cape May Canal, 130 miles from Rutgers University’s main campus in New Brunswick. The facility and its team support research and commercialization for New Jersey’s aquaculture industry, which has an economic impact of approximately $36 million annually for the state.

Motivated by Michael De Luca, AIC director, and David Bushek, director of the nearby Haskin Shellfish Research Laboratory (HSRL), technical staff and scientists from both facilities work together to achieve research milestones and maintain these centers in a coastal region where climate change provides new obstacles every season, particularly with rising sea level and changing temperatures.

“I’ve hired every one of the staff at the AIC. They’re just super talented, easy to work with, very team oriented. And the nature of science today is collaborative science. The challenges that we face with climate change and managing our coastal resources cannot be addressed by a single discipline. There’s a lot of factors that have to be addressed, and it does take a team approach, and that’s the approach that we take at the AIC,” says De Luca.

Margaret Brennan-Tonetta, NJAES senior associate director and director of resource and economic development, champions the facility directors. “Dave and Mike are great examples of leadership—working hand in hand with the staff, creating a supportive team environment, and acknowledging the outstanding efforts of the staff,” she notes. 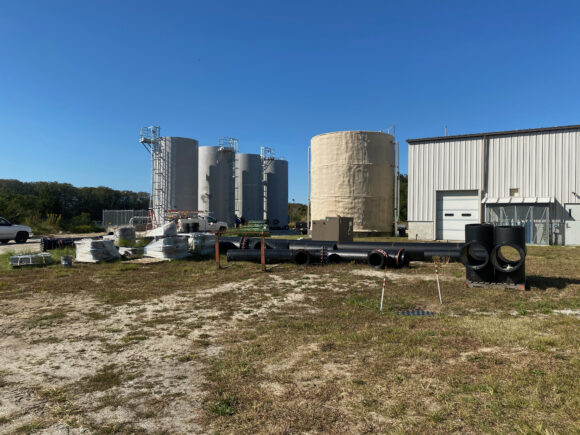 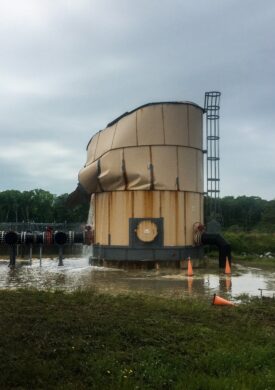 Catastrophic failure of one of the epoxy lined steel panel tanks at the AIC.
Photo credit: Michael Acquafredda (GSNB’21).

A striking feature of the AIC was a pair of 60,000-gallon epoxy lined steel panel tanks that pumped raw seawater from the Cape May Canal at a rate of 2,500 gallons per minute to be filtered, sterilized, and temperature-adjusted. The water is used in aquaculture tanks and algal culture rooms throughout the building. In May of 2019, the steel tanks endured a catastrophic failure from saltwater corrosion and needed to be replaced. However, this was not a project that could be fixed with a quick trip to the hardware store and a screwdriver.

While working with Rutgers Institutional Planning and Operations (IP&O) and an engineering firm (Penonni) for the redesign of the new tanks, staff members Dave Jones, Sean Towers and Mark Baranoski were, according to De Luca, “absolutely instrumental” in conveying the AIC’s precise needs. Four 40,000-gallon fiberglass settling tanks are now actively filtering the AIC’s water supply. De Luca continues, “There’s a lot of detail that goes into the design and installation of these tanks. There’s a series of sand and UV filters that the water will go through—a lot of detailed plumbing that requires a lot of physics and engineering to ensure safety and functionality when moving such large volumes of water. And our team just understands that so well. Without our staff’s guidance, input, and attention to detail throughout the process, we would probably still be at the drawing board, or we would have a system that simply doesn’t meet our needs.”

Brennan-Tonetta echoes that sentiment. “The work required to replace the collapsed seawater tanks at the center was monumental. Thanks to the outstanding dedication of the center staff who worked long hours and went above and beyond their normal duties on a regular basis, the project was successfully completed.”

The aquaculture spawning season demands a similar all-hands-on-deck mentality at the AIC. During this time, adult oyster broodstock respond to the staff carefully raising the temperature of the water in their tanks, just enough to convince the oysters that conditions are optimal for spawning. The babies that grow to be “seed oysters” are vital for oyster farms to sell at full size, for use in research projects, and to help rejuvenate oyster populations in the wild.

Mike De Luca explains, “The spawning doesn’t occur on a 9-to-5 schedule. It could go off at 4pm on a Friday. And so, the staff stays. The plans for that evening or that weekend with family and friends go out the window. It’s a lot of work. We have to feed and check the shellfish seven days a week, and if the spawn goes off, you call everybody in.” De Luca appreciates the positive attitudes of his colleagues, along with a willingness to do “whatever is necessary to ensure the success of these spawns and of the facility.”

Recently, the AIC team worked with the Haskin Lab on the construction of a living shoreline using expertise from program coordinator Jenny Shinn, who has worked on several living shoreline projects in Delaware Bay. Seth Richter, Environmental Projects Manager for Rutgers IP&O, Shinn, and engineers from Penonni and Sovereign Consulting all collaborated with the AIC staff to tackle the issue of erosion in a swale at the base of the AIC property. Boat wakes from rapidly moving watercraft on the Cape May Canal, combined with an outflow pipe that returns water to the canal after it has cycled through the facility’s aquaculture tanks, have caused this erosion. With limited options for the protection of the swale and surrounding uplands, David Bushek and Shinn saw this as an ideal site for a living shoreline with multiple benefits. 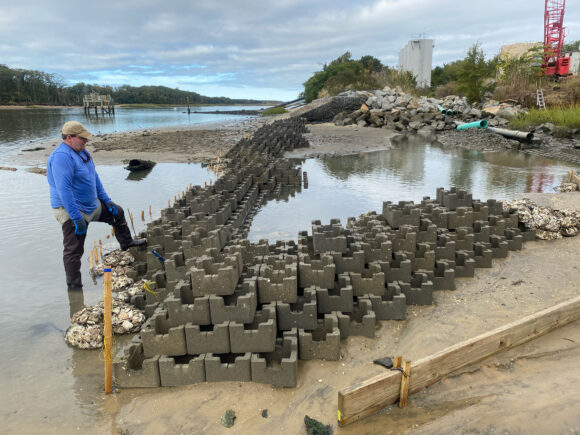 When one thinks of castles, you may conjure images of royalty or fairy tales. You can also build a castle fit for an oyster. De Luca states, “The AIC living shoreline consists of Oyster Castles® (Allied Concrete Co., Charlottesville, Virginia, USA), or concrete blocks that dissipate wave action and serve as habitat for the recruitment of oysters which will settle on the hard surface. Behind the Oyster Castles®, marsh plants will be planted to help contain sediment, so it is not eroded from the wave action and water outflow pipe.” This living shoreline is a prime example of the AIC staff working collaboratively to solve a pressing issue with scientific expertise, creativity, and hard work.

When asked what contributes to a sense of pride in his work at the AIC, De Luca responds, without hesitation. “I think it all comes down to the people. I just enjoy working with them. I learn from them. I hired them because they’re smart and they have talent, but also because they work together well in a team environment. It is a family. It’s a family operation.”