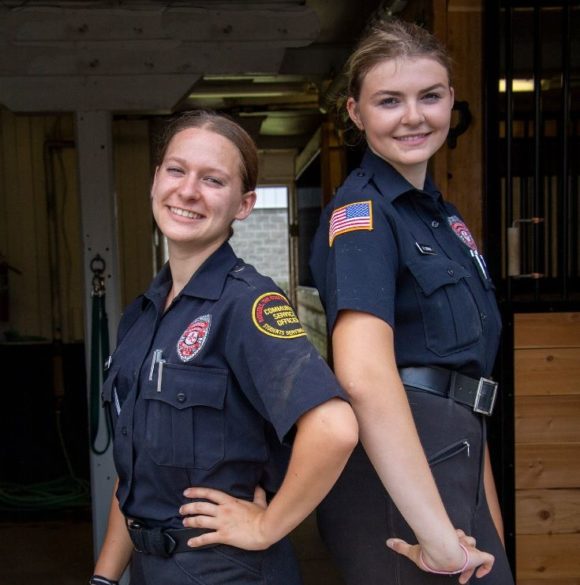 Take a walk on any of the unpaved paths around the Cook-Douglass campus, and you’re likely to see some hoof prints mingling with footprints, a sure sign that the Rutgers University Mounted Patrol (RUMP) recently passed by. 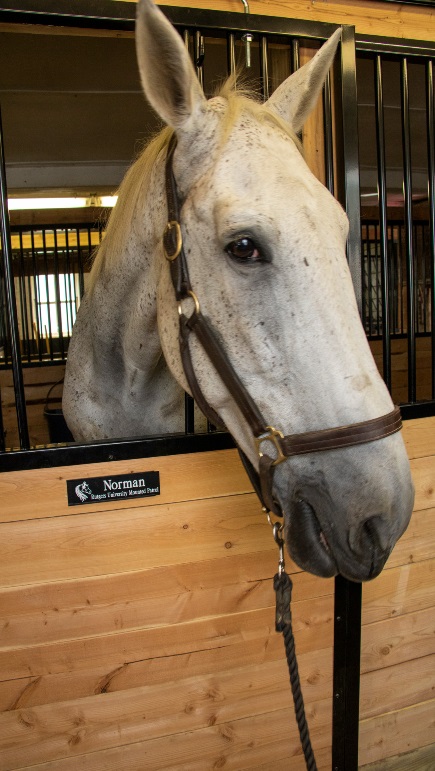 Norman, a Rutgers University Mounted Patrol horse, enjoys his newly renovated box stall thanks to a generous contribution from an anonymous donor.

The Mounted Patrol has a long history at Rutgers. In fact, the step bridge spanning George Street between Loree and Hickman Halls was designed specifically to be negotiated by officers on horseback! Originally established in the 1970s, the Mounted Patrol was a program under the Rutgers University Police Department (RUPD), and was staffed by RUPD officers. Over time, the Mounted Patrol transitioned into a division of the Rutgers Community Service Officer (CSO) program, which is overseen by the Rutgers Public Safety Department. Today’s RUMP maintains a staff of approximately twelve student CSOs, making it the only student-run mounted patrol service in the United States. In addition to being a division of the CSO program, RUMP is also a student club which allows the group to participate in events such as Relay For Life, Monster Mash, and Ag Field Day at Rutgers Day. Additionally, RUMP is closely associated with the Rutgers farm staff, who provide daily care for the three RUMP horses; Austin, Norman, and Kash. Last year, RUMP received a generous contribution from an anonymous donor that enabled the Mounted Patrol to renovate their barn. The Mounted Patrol barn was originally an animal nutrition barn and was repurposed to serve as an equine barn for the RUMP horses. However, the barn’s history remained quite apparent. Prior to the recent renovations, the building was better suited to being an animal nutrition barn than a working mounted patrol barn.

The layout of the three original stalls resulted in a cramped floor space, and there were no places to set saddles and other equipment while tacking up horses to go out on patrol. “It was a really tight area,” says RUMP officer Lara Watrous, describing the layout of the barn prior to the renovations. “You could not turn a horse around inside here.” The newly refurbished barn has a total of four box stalls with a more horse-friendly layout, a wash area, and a significantly more open floor space. Both Lara and her fellow RUMP officer Kaitlin Quinn say the new renovations have made their jobs not only more convenient, but safer as well. 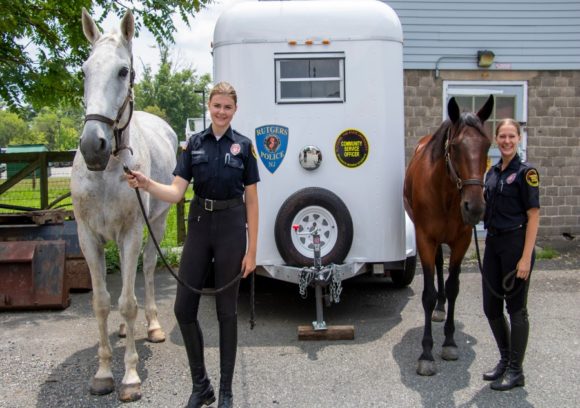 Officers can now safely turn horses around within the barn, and the newly installed folding saddle racks allow the officers to tack up their horses much more efficiently. As is often the case on a farm though, there is always something new to be done. The Mounted Patrol is hoping to install a drainage system for their wash area in the near future. Becoming a member of the Mounted Patrol requires a fairly rigorous application process. Applicants must first apply for and get accepted into the Community Service Officer program through the Rutgers Public Safety Department. Once accepted, applicants can then apply for a position on the Mounted Patrol.

This application process consists of a written horse knowledge exam covering topics such as equine medicine and anatomy as well as a practical exam. Applicants must demonstrate ground skills such as catching, grooming, and tacking a horse as well as the riding skills that one would be required to use while on a patrol—trotting or handling a spooking horse, for example. If the applicant is then accepted into the