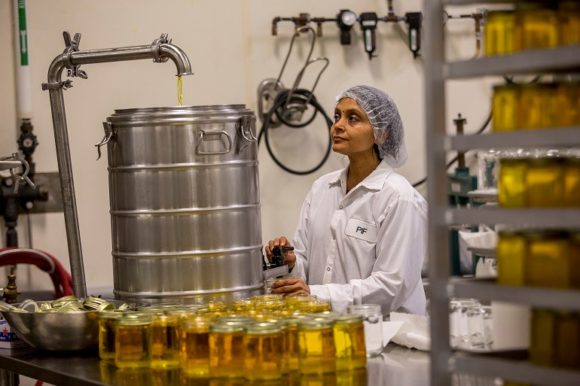 Ghee, or clarified butter, has been sold in India for thousands of years. The Agarwal family has been selling it for 130 of those years out of a small shop in the northern Indian town of Hisar, and for the last 10 years, from a business based at the Rutgers Food Innovation Center in Piscataway under the brand Pure Indian.

Sandeep Agarwal recalls his grandfather running the shop in India, but he wasn’t an early adopter of the family business. The IT veteran spent 15 years on Wall Street and in corporate New Jersey before he and his wife Nalini jumped into the food business after their son’s poor health spurred an interest in what was actually going into their bodies.

Now, 10 years on, they sell their product all over the country and the whole family, son included, is in good health. 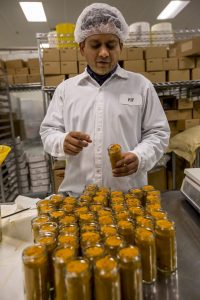 Ghee is made by melting butter until it separates into liquid fats and milk solids, then separating the milk solids out, leaving something with little lactose and a high concentration of fat.

Although used in India for centuries, ghee is a fairly new ingredient in the American kitchen. When the Agarwals started selling ghee here, people would call and ask, “How do we use this?”

“My wife would laugh. It’s like me asking you ‘how do you use salt?’ You just use it!” he said.

Tasked with introducing the ingredient to a Western audience, they hired chefs and dieticians to make mainstream recipes, like chocolate chip cookies and chicken soup, that show ghee as an alternative to butter or oil.

The American palate is different, he noted, but receptive.

“People seem to appreciate the knowledge that different ethnicities bring to the table. People want to learn and try,” Agarwal said.

So, what keeps people from trying new things in the kitchen? Agarwal says change is daunting, and home cooks don’t know how to use certain ingredients. Pure Indian developed a line of spice-infused ghee to cater to those who love the idea of spice, but can only confidently use salt and pepper.

“People love to give spices as gifts, but then they just don’t know what spice combinations to use,” he said. “So we’re making the spice-infused ghees for our mainstream customers who are daunted by how to combine them.”

Cooking up Italian? There’s a ghee for that, with an organic blend of oregano, rosemary, and thyme. Want French food? Try herbes de provence ghee.

And for authentic Indian flavors, Pure Indian Foods recently launched Curry in a Hurry. Add one tablespoon of the curry paste to sautéed veggies, to rice, or to chicken to give it a kick, or slip it into soups at restaurants to give the flavor of Indian home cooking.

After 10 years, Pure Indian’s production is like a well-oiled machine. But coming from a different industry—food production was nothing like IT, as Agarwal would come to find out—there was a lot to learn.

“There was a learning curve. How will we pack the product? How about the labels, how am I going to come up with nutritional info?” he said. “It was all a learning curve, and I kind of enjoyed it … [figuring out] how to accomplish our goals and stay in business, while also following all the laws of the land and creating a great quality product.”

Rather than just a laptop and phone, as in IT, he needed physical equipment and the space to put it, and needed to check all sorts of boxes: food safety and quality standards, fair labor standards, and approvals from the FDA and USDA.

That’s where the FIC’s facilities, which house all of Pure Indian’s production and personnel, have come into play.

“Equipment, [quality assurance] professionals, cleaning crew … it provided a one-stop shop,” he said. “And they would guide us every step along the way about any regulations we needed to worry about.” 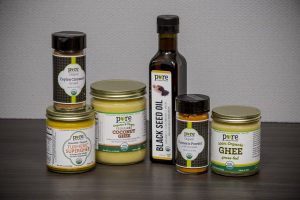 Pure Indian Foods only obtains milk between spring and fall, while cows are grazing on fresh grass in the sun. “The farmers say it’s a good thing, that the cows need a break,” said Sandeep Agarwal.

Pure Indian sources its milk from a dozen or so small farms, mostly in Pennsylvania. As an organic product, it gets audited by the New Jersey Department of Agriculture yearly for recertification, which Pure Indian has achieved for the past 10 years.

Quality matters to Agarwal. It matters so much that he and his wife limit the size of the business to what can be sustained by the number of farms they work with, and even encourage customers to limit their wintertime purchases based on what’s best for the cows and the farmers.

“We will not increase our capacity if we cannot maintain the quality parameters that we have set up,” Agarwal said. “We basically only work with small farms. We will not work with large factory farms. Those products are already available in the grocery store — why would the customer come to us if we did, too?”

Agarwal only obtains milk between spring and fall, while cows are grazing on fresh grass in the sun. The idea behind this, he said, is that whatever the cows are eating reflects in the quality of the milk, and the wintertime has them mostly indoors eating dry matter.

“The farmers say it’s a good thing, that the cows need a break,” he said. “That’s when they’re drying up the cows and getting them ready for the next lactation period. We care about our cows and the farmers as well. This kind of cycle works well for everybody.”

Though production is slowed in winter months, Agarwal stays busy with research, with blending spices, and with meeting prospective spice suppliers in India. These vendors are also small farmers, growing spices like turmeric, who obtain USDA certification and meet Agarwal’s personal standards of quality and ethics.

Carrying on a legacy

Agarwal honors his family history. “Ghee has been adulterated since its inception because it’s an expensive product,” he said. “My responsibility is to carry on the family legacy where our focus is to have highly satisfied customers, and not to lose sight of this in the need to grow the business.”

The shop in Hisar, though still open, has limited its scope. His cousin in India, the would-be fifth-generation owner, decided to pursue a tech office job instead.

“The newer generation [in India] see ghee as an old economy business. They want to do computers, whereas having lived in the U.S. for 15 years and worked in the industry, I find the ghee business to be very cool and up and coming,” Agarwal said. “We kind of traded places in that sense.”