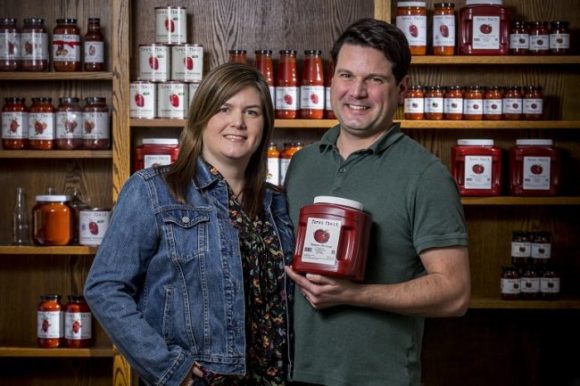 There were a few extra tomatoes. Well, 600 pounds extra. It was enough for Theresa Viggiano and Patrick Leger to experiment with his mother’s ketchup recipe and sell it at the honor-based farm stand at the end of their driveway in 2011.

Viggiano was in grad school at the time, and Leger was working in investment management. Farming was just a hobby, they said, a fun pastime shared with friends. They’d been selling their produce at the farm stand and local markets, and when their harvest yielded more than the markets could sell, Leger said, making ketchup both extended the life of and added value to their Jersey-grown tomatoes.

“Whole Foods contacted us and asked if we could provide them with enough ketchup for their Northeast stores. That’s when we realized a 600 pound bumper crop didn’t get you very far,” Viggiano said. 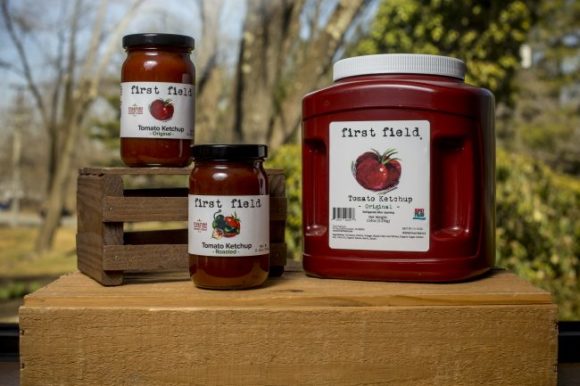 First Field’s tomato ketchup products are made at the Rutgers Food Innovation Center and use tomatoes only from New Jersey.

That was a turning point in their business: Viggiano and Leger were accustomed to growing everything themselves and cooking up ketchup until 2 a.m. in rented space. With guidance from local agricultural extension agents and Rutgers University’s agricultural school, the couple connected with some South Jersey growers. And after reading an Edible Jersey article about the Rutgers Food Innovation Center in Bridgeton, they reached out to discuss using their facilities.

Since First Field’s relationship to the FIC started in 2012, it’s shifted and changed. Viggiano and Leger used to do everything in a house in Bridgeton, but now also use a local copacker. They’re in Bridgeton about once a month, testing new products and picking people’s brains—bouncing ideas off the FIC team, talking about anything from ingredient sourcing to packaging sizes.

“What’s so great about them is they’re nimble enough to meet you where your business is,” Viggiano said.

“They really help us get products manufacturing ready,” said Leger. “They’re super passionate and it’s been a great collaboration for several years. We know a lot of food companies based in Brooklyn and New York, and they don’t have the same type of resources available in that sense. Plus, it’s right in the thick of the tomato patch down there. It keeps everything very efficient.”

Few places are better to start a tomato-based company than New Jersey. The state ranks seventh in the nation in tomato production, growing 112 million pounds per year on 4,000 acres. The product is valued at $39.2 million, according to 2017 figures from the state Department of Agriculture.

In the past few years, Viggiano and Leger added pure strained tomatoes, crushed tomatoes, a line of pasta sauces and seasonal cranberry sauce and relish to the roster. First Field products are now on 300 shelves.

The expanded line, a calculated move toward being a tomato company rather than a ketchup company, resulted in what the couple calls two big shifts: breaking out of specialty into center aisle products in 2016, and expanding from consumer sizes to restaurant sizes more recently.

“It’s one of our big moments,” she continued. “That can of tomatoes is something everyone from our grandparents used to what a budding chef uses in the kitchen. [Putting that out] was a really big deal to us.”

If it’s possible for ketchup to have a heart of gold, First Field has it. Not only do they carefully source ingredients—their spices are fair trade and organic, and their apple-cider vinegar is from a family-run company—Viggiano and Leger are helping another local farmer to turn his property into a nonprofit aimed at encouraging land stewardship through educational workshops. The Hearth Center will be located at Orchard Farm Organics in Princeton.

“It’s in the early days right now, but it’s transitioning into a place for people to learn about the land in a way that’s meaningful to them and to the community,” said Viggiano.