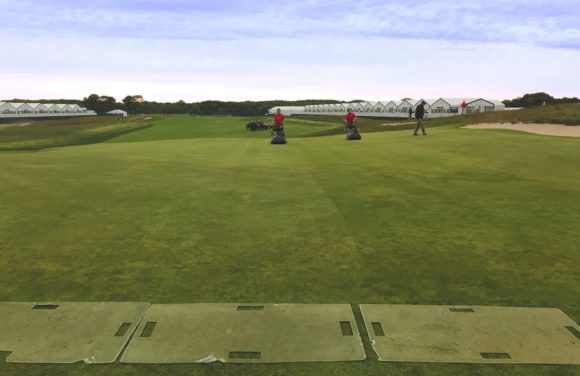 Rutgers turf alumni have a rich history at Shinnecock Hills Golf Club and offer an insider’s view of preparing the course for the 118th U.S. Open held this year.

In June, golfers like Tiger Woods, Dustin Johnson and Jordan Spieth competed in the 118th U.S. Open Championship at Shinnecock Hills Golf Club. This New York course is ranked just behind Pine Valley, Augusta National and Cypress Point in the 2017-18 edition of Golf Digest‘s “100 Greatest Courses in America.” Of the approximately 5,000 volunteers on hand to help with all aspects of this famed event, only 160 are chosen to work on the grounds crew and Rutgers can proudly brag that about a dozen of the turf managers were Scarlet Knights!

Rutgers’ Native American Roots at Shinnecock
The story of Pete Smith, a 1982 graduate of The Rutgers Professional Golf Turf Management School’s Two-Year Certificate Program, is one of deep familial and cultural ties. Smith was born and raised as a member of the Shinnecock Indian Nation. He grew up on the reservation (just a mile south of the 10th hole) and was a tribal leader of the Native American clan, who helped build Shinnecock Hills Golf Club back in 1891. His grandfather worked on the greens staff for nearly 50 years; and his father logged 30 years as the superintendent. Following that proud family legacy, Smith took the reins as superintendent in 1980.

Although he grew up on the golf course and within a family of turf managers, Smith formally learned the science behind grounds maintenance at Rutgers University. He attended two 10-week sessions on the Rutgers Cook Campus in New Brunswick, New Jersey, in 1981-1982. Learning from Rutgers’ diverse instructional team made up of university faculty, research scientists, plant pathologists, irrigation consultants, superintendents and other industry experts, he studied agronomy, botany, soil fertility, irrigation principles, turfgrass diseases/insects/weeds, ornamental plants, budgeting and much more. With this comprehensive education informing his efforts, Smith successfully led the charge in preparing Shinnecock for the 1986 and 1995 U.S. Open events.

Although Smith passed away in 2002, #RUTurf students and alumni still have their “bunker-raking hands and divot-filling feet in the game.”

Years of Planning and Prepping
The United States Golf Association (USGA) estimated that 250,000 people from around the country and world visited Long Island for the week-long tournament. To prepare, logistical planning was in the works for years. Ryan Baker, who graduated from Rutgers Two-Year Certificate Program in 2017, was one of the vital volunteers on the greens team. Last year, he worked at National Golf Links of America, another prestigious golf course in Southampton, New York and observed the initial preparations with curiosity and interest.

“I never had the chance to get out and walk the grounds of Shinnecock, but it was a great experience even just getting to see them prepare from nearby,” he said. “I was very excited to be a part of all the action this year.”

Steven Furneaux, a 2018 graduate of the Rutgers Two-Year Certificate Program, said that all the years-in-advance hustle and bustle of preparing Shinnecock for the US Open peaked his interest in volunteering. “While interning at Atlantic Golf Club, which is about 10 minutes from Shinnecock, I was surrounded with all the talk and hype on a daily basis,” he said.

As the event drew nearer, Furneaux began to understand why the preparations began so many months in advance. “The tournament is a very big deal. Temporary train stations, pedestrian overpasses were put in and roads were closed.” 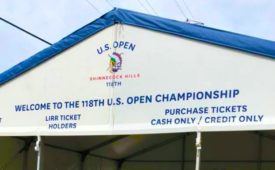 Entrance to Shinnecock Hills for the US Open 2018. Photo by Rutgers 2-Year Alumni Joseph Edwards.

A Typical Day for the Agronomy Team
Once the games began, the greens team, led by Shinnecock Superintendent Jon Jennings, was on high alert. In fact, each day began with a 3 a.m. breakfast and a 4 a.m. morning briefing.

Lorabeth West, a 2014 graduate of the four-year degree program offered by Rutgers Center for Turfgrass Science, explained, “I got in Sunday (June 10) and stayed right across the street from the maintenance facility in the dorms at Stony Brook University.” It was an exhausting, but exhilarating experience. “I worked all the shifts, morning and night, the entire week. I really looked forward to this!”

By 4:15 a.m. each day, West and the rest of the grounds crew were busy doing morning maintenance. The team rushed to mow fairways, tees and greens, rake bunkers, blow off debris, fill divots, change hole locations, and do everything and anything else needed to get the course prepared for play. Everything had to be perfect because the world was watching. In fact, according to the USGA, television coverage of the event reached 150 countries!.

By 8 a.m. sharp, the volunteers, working alongside Shinnecock’s regular staff, were back in the maintenance facility to clean and adjust equipment. The numbers are staggering. Mechanics adjusted almost 100 mowers twice-a-day to make sure they were cutting properly.

In the “Road to the U.S. Open” podcast with Dan Beyer, Jennings described the 20+ fairway mowers, 30+ greens mowers and assorted other hands-on crew members as something like a ceremonial spectacle. “It is really a sight to see in that parade of equipment and people that go out on the golf course.”

Like West, turf alumnus Furneaux also worked with the grounds crew for the full 7-day duration of the tournament. “When I received the email detailing the daily schedules, it was clear that we were going to be busy!”

Well Worth the Effort
In “The Road to Shinnecock” diary series by Golf Course Industry and BASF, superintendent Jennings said, “Every time that I have volunteered at an event, I have gleaned at least five ideas that I can bring back to the place where I have worked and implement them to make our operation better.”

In addition to practical benefits of professional experience, volunteers receive a package of U.S. Open branded merchandise and bragging rights.

Robert (Bruce) Ferguson, a 2017 graduate of university’s 2-Year Certificate Program, was eager to learn what it takes to prepare for an event as prestigious as the U.S. Open.

“I was thrilled to see how the whole operation flowed firsthand,” he said. “But I was most excited to walk on and prepare the golf course for players like Tiger Woods, Dustin Johnson and Jordan Spieth.”

Plus, working an internationally recognized tournament like the U.S. Open is a valuable opportunity to meet other people. West, who worked at the LPGA Swinging Skirts Classic in 2016, the Wells Fargo Championship in 2017 as well as the Walker Cup in 2017, knows firsthand that networking is key to career advancement.

“I have met so many people that have gone to Rutgers,” said West. “It is always great to be around them. Everyone is so proud of Rutgers, as am I!”