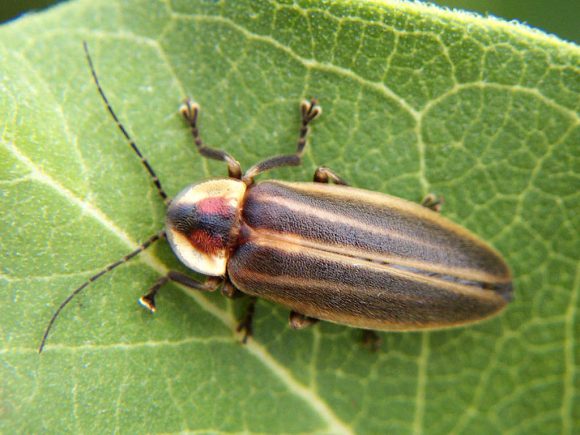 I saw the first fireflies in my garden about two weeks ago, and I knew summer had officially arrived. Just for fun, I did some research to learn more about them and thought I’d share what I learned with you:

First of all, fireflies are beetles, not flies. When they fly, you might notice they hold their dark striped “wings” up. These modified and hardened wing covers (called elytra) are a hallmark of beetles and protect the delicate pair of wings that lie beneath that do the actual flying.

Fireflies are very special in the insect world because of their ability to generate light—those delightful flashes that make a summer evening so magical. But it’s not only the adults that can do this; they can flash as eggs and as larvae—the “glowworms” you might see in leaf litter if you take an evening stroll in the woods.

Special cells in their bodies contain a chemical called luciferin (from “lux,” Latin for light). When combined with oxygen, this chemical produces light with almost no heat as a byproduct. The frequency of their flashes is unique to each species and helps the adults find mates.

And here’s another surprise: Their life cycle can take two years to go from egg to adult. The firefly life cycle has four distinct stages: egg, larva, pupa and adult. Eggs are laid in midsummer, usually in or on soil that retains moisture (such as under leaf litter) and usually hatch in three to four weeks.

The larvae (sometimes called glowworms) look like small flat worms, with definite body segments. They usually live in the soil, hunt at night, and are voracious predators of slugs, worms and snails. They use the same technique as spiders: injecting their prey with digestive enzymes and consuming the liquefied material.

The length of the larval stage varies by species, lasting through either one or two winters. They molt as they grow, reaching a length of ¾-inch before entering the pupa stage in late spring. Some species create a chamber within the soil, while others attach to tree bark and dangle upside down like a caterpillar. Metamorphosis takes two to four weeks.

The newly emerged adults have but one purpose: to find a mate and complete the cycle. Generally, it is the males who do the flying. They are looking for a female who has the same species-specific flash pattern—a sort of sexual Morse code. Once mating occurs, eggs are laid in late summer and the cycle begins again.

As with several other insect species, firefly numbers have declined due to a loss of habitat. Tidy suburban gardens generally don’t provide the leaf litter so essential to their life cycles.

Want to know more? Or want to know how you can provide a firefly-friendly garden? Check out this very informative website, firefly.org. Homeowners with lawn or garden questions can contact the Rutgers Master Gardeners at 609-265-5050 or the Burlington County Master Gardener’s webpage.