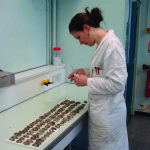 The Pacific oyster, which is native to Asia but transplanted to all continents except Antarctica, is the number one oyster species cultured globally. A close sister species of the native eastern oyster, Pacific oysters are cultured on the West Coast of the U.S., as well as France, and Australia. Since the early 1990s, they have […] 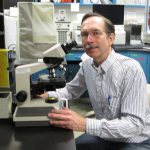 Thomas Montville, distinguished professor emeritus in the Department of Food Science, is the recipient of the 2016 President’s Lifetime Achievement Award from the International Association for Food Protection. He is best known for his pioneering mechanistic work on the antimicrobial peptides (bacteriocins) of lactic acid bacteria and their applications to the safety of food systems. […]

The number of New Jersey peach farmers is dwindling, leaving peach lovers considering the future of one of the state’s most valued crops and plotting ways to reverse the trend… To help New Jersey farmers compete, Rutgers University’s Tree Fruit Breed…

New federal standards for protecting agricultural workers and their families from pesticide exposure will come into effect in January, and officials were at a farm here Wednesday to talk about the changes… “Extension offices will help get the word out through educational materials and workshops offered to farmers in the off season,” said Pat Hastings, Pesticide Safety Education Program Coordinator for New Jersey Cooperative Extension. “We will work in cooperation with each county, that’s the only way we can reach everyone,” Hastings said.

The heat wave gripping Cumberland County and parts of the Northeast will continue through this week after a heavy dose of heat Monday… “It’s fair to say that the vast majority of the nation has been experiencing above normal temperatures for the past week,” said David Robinson, New Jersey state climatologist at Rutgers University.

When the world’s top male golfers gather at the legendary Baltusrol Golf Club this week, they will be playing on numerous turfgrasses developed by Rutgers University. 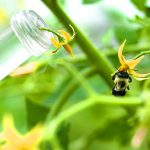 Research is helping to develop protocols for pollinator conservation and restoration. The lab of Rachael Winfree, associate professor in the Department of Ecology, Evolution, and Natural Resources, focuses its research on bees and pollination, including the pollination of crops, and in communicating those scientific results to the agricultural community. Her lab has focused its outreach […]

Spot any underwings lately? These popular moths, known for revealing their true, vibrant colors when their wings are fully spread, will be spotlighted this summer as National Moth Week marks its fifth consecutive year across the U.S and around the worl…

The New Jersey Department of Environmental Protection has issued a drought watch for the northern half of the state… Dave Robinson, New Jersey’s state climatologist at Rutgers University, said the declaration makes sense. “This is a prudent step given that we have had a very hot spell and of late have not had rainfall,” he said. “We dodged this action about three weeks ago when we had significant rains sweep through the state, but now we’re seeing the reservoir levels starting to fall again and things dry out. It is prudent to give people a heads up that things are dry and we really do need to conserve water.”

When the world’s top male golfers gather at the legendary Baltusrol Golf Club this week, they will be playing on numerous turfgrasses developed by Rutgers University… Rutgers has a decades-long record of breeding and cultivating top-performing turfgrasses, according to Bruce B. Clarke, extension specialist in turfgrass pathology and director of Rutgers’ Center for Turfgrass Science, which is celebrating its 25th anniversary… To date, Rutgers has developed more than 400 varieties of turfgrasses and licensed them to more than 20 companies, according William A. Meyer, professor and director of turfgrass breeding at Rutgers… “Anywhere cool-season grasses are being grown in a sports stadium, there’s a very good possibility that it’s a Rutgers grass, maybe not the entire stadium, but part of it,” said James A. Murphy, Rutgers’ extension specialist in turfgrass management. “It’s sold all over the world.”