A new study looking back over 1,000 years finds the flooding risk along the New York and New Jersey coasts increased greatly after industrialization, and major storms that once might have occurred every 500 years could soon happen every 25 years or so… The study by Penn State, Rutgers, Princeton, and Tufts universities, and Massachusetts Institute of Technology, finds that flood heights have risen nearly 4 feet since the year 850, largely because of a sea level rise. The study advocates better risk management strategies to cope with storms… “A storm that occurred once in seven generations is now occurring twice in a generation,” said Benjamin Horton of Rutgers, one of six lead researchers involved in the study. “What we do know is that as sea level rise accelerates into the future, we are going to have more frequent flooding.”… “Every inch deeper in a core takes you further back in time,” Horton said. “We can stretch this technique back hundreds of years and thousands of years.” 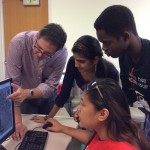 A unique GeoHealth Workshop at Rutgers over the summer engaged over a dozen students in exploring spatial technology and what it reveals about health in the urban landscape. Held at the Rutgers Grant F. Walton Center for Remote Sensing and Spatial Analysis (CRSSA) on the Cook Campus, the workshop was facilitated and conducted by David […]

Close your eyes and imagine this: airplanes, equipped to disperse sulphuric acid, are flying in the lower stratosphere. When released, the sulphur combines with water vapour to form minute sulphate aerosols. Once spread across the globe, the aerosols w…

Older adults with low vitamin D levels – and that accounts for most of them – might lose their memories and thinking abilities faster than those with normal vitamin D levels, researchers say… “There is a recent and growing literature on the associations between vitamin D status and risk of Alzheimer’s disease/dementia, cognitive decline and brain atrophy,” said Dr. Joshua W. Miller of Rutgers University… In the new study, the researchers looked at blood levels of 25-hydroxyvitamin D, the form generated when the body converts vitamin D made in the skin in response to sunlight and consumed in foods such as eggs, oily fish and milk.

A new agreement on the development of healthy food products between Israel’s Tel-Hai College and New Jersey’s Rutgers University brings together two groups that together, leaders of the institutions believe, will be able to greatly advance the cause of…

A symposium on legal, business and insurance issues impacting the equine industry is being presented Oct. 12 by the Equine Science Center at Rutgers University. The program, featuring experts from all three fields, will be held at the Palace at Somerset Park in Somerset. Topics to be covered include immigration law, worker’s compensation for equine operations and insurance coverage, as well as an exploration of the state’s “Right to Farm Act” in order for the equine industry to succeed, people in the horse industry have to run their business as a business, said attorney Liz Durkin, vice-chair of the Rutgers University Board of Equine Advancement… “The event organizers felt that it was important to host a seminar, for a nominal fee, that will address the basics of the legal, accounting, and insurance topics for equine operators. Our goal is to assist equine operators in becoming as successful as possible.”

A bigger, heartier catnip plant – whose enriched oil may be more potent for felines and an alternative mosquito repellent – has been developed for specialized commercial farmers by Rutgers University… The Rutgers New Jersey Agricultural Experiment Station (NJAES), which has spent more than a decade developing the new breed, CR9, recently licensed the product to Ball Horticulture, an Illinois company that will produce the seeds for commercial farmers… “In the past catnip wasn’t grown much because the plant itself was never developed to generate commercially acceptable yields from its leaves and flowers, which produce its aromatic volatile oils, and thus wasn’t profitable,” James Simon, professor in the Department of Plant Biology and Pathology at the Rutgers School of Environment and Biological Sciences, said in a statement. Simon led the plant breeding in the development of the new catnip variety… The NJAES expects to release a line of smaller catnip plants, also with unique essential oils, for home gardeners. The new breed of catnip should be available as seed by 2017.

Lawns have taken a beating from the long, hot dry spells of summer and many are now in urgent need of repair or renovation… “Most lawns are made of cool-season grasses that don’t like excessive heat without rain,” says Bill Hlubik, Middlesex County agricultural agent and producer of the television series/website If Plants Could Talk. “If your lawn hasn’t started to green up after recent rains, chances are it’s not going to.”… The prospect before you involves reseeding bare areas. While core aeration machine that pull plugs of dead sod and soil from the lawn are ideal for site preparation, they are heavy and difficult for many to operate. Hlubik suggests renting a lighter-weight dethatching machine to remove surface debris if you’re not up to using an old-fashioned rake.

A bigger more hearty catnip plant – whose enriched oil not only promises to drive cats crazy with pleasure but also may be a safer, more effective mosquito repellent – has been developed for specialized commercial farmers by Rutgers University… The Rutgers New Jersey Agricultural Experiment Station (NJAES), which has spent more than a decade developing the new breed, CR9, for the insect repellant and pet toy industries recently licensed the product to Ball Horticulture, an Illinois company that will produce the seeds for commercial farmers… “In the past catnip wasn’t grown much because the plant itself was never developed to generate commercially acceptable yields from its leaves and flowers which produce its aromatic volatiles oils, and thus, wasn’t profitable,” said James Simon, professor in the Department of Plant Biology and Pathology at the Rutgers School of Environment and Biological Sciences who led the plant breeding in the development of the new catnip variety. “We developed a super catnip that can survive northern winters and produce copious amounts of aromatic oil with a special composition that is rich in the bioactive compound that repels the mosquitos away and drives cats wild.”