Many people have pushed olive oil aside in recent years in favor of coconut oil, which has garnered headlines for its ability to improve everything from your cholesterol profile to weight loss. But a new study may have you extending an olive branch, so to speak, to extra virgin olive oil. When researchers added a compound found only in certain types of olive oil- an antioxidant called oleocanthal- to cancer cells in the lab, something amazing happened: It wiped out the cancer cells in less than an hour. Even better, the oleocanthal didn’t harm the healthy cells… “That was definitely an OMG moment,” says study co-author Paul Breslin, a professor of nutritional sciences at Rutgers University… They’re found in the Mediterranean diet, which time and again comes out on top in terms of being associated with longevity and lower rates of cancer, heart disease, and dementia, Breslin says. The takeaway? Eat plenty of fresh fruits, vegetables, and fatty fish, use olive oil generously, limit processed foods and meats, and drink green tea.

The brown marmorated stink bug (BMSB) is here to stay. Found in the U.S. in the late 1990s, this pest attacks peppers, tomatoes, pumpkins, sweet corn, apples, peaches, and several other fruits and vegetables. Plus, it can be found in virtually all stat…

If, like me, you’re an amateur taster of beer and wine, inevitably you’ve asked yourself why you don’t taste that hint of raspberry or note of pine bark that someone else says is there… Genetics certainly have something to do with why we have different perceptions of tastes. Scientists have shown there’s a genetic component to how we experience bitter and sweet flavors, as we’ve reported. And “supertasters,” who seem to be born rather than made, are said to experience a lot of tastes more intensely… Paul Breslin, a member of the center and a professor at Rutgers University, studies the genetic basis of human oral perception… Back in 2002, Breslin and a couple of colleagues got interested in the phenomenon of how some individuals can become increasingly sensitive to certain odors over time, detecting them at lower and lower concentrations. Earlier studies had suggested there is a gender component to this phenomenon, and Breslin and his colleagues wanted to look into it further.

Entrepreneurs who want to start oyster farms in South Jersey say New Jersey’s regulations are a hard shell to crack… No fewer than 11 state and federal agencies typically have some say over the commercial use of New Jersey’s waterways. This sometimes leads to contradictory instructions and other conflicts that can tangle businesses in needless red tape, industry officials said… “It’s an issue. It’s probably the primary limiting factor in the growth of aquaculture in New Jersey,” said David Bushek, director of the Haskin Shellfish Research Lab at Rutgers University. “The Office of Shellfisheries is working very hard to streamline the process.”… Aquaculture is a $5 billion industry in the United States, according to the National Marine Fisheries Service. Farmed catfish and salmon are top producers. Farmed oysters such as those grown in the Delaware Bay generate $100 million per year. Virginia alone is responsible for $45 million of that. 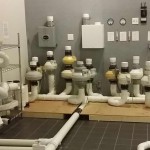 Rutgers recently redesigned and constructed a cutting-edge radon training lab for hands-on learning. For over 25 years, the Eastern Regional Radon Training Center (ERRTC) at Rutgers University has been providing professionals throughout the country with training in radon measurement and mitigation. To offer students an even better learning experience, the ERRTC opened a brand-new, state-of-the-art […]

Imagine sitting in front of the historic Log Cabin, at white linen-covered tables with the sun setting as the backdrop. It’s here on Thursday, Sept. 10, from 5 to 8:30 p.m. that friends of the Rutgers Gardens will share a culinary experience at the inaugural Gardens Party… The best food and wine offerings from the Rutgers Gardens Farm Market vendors will be featured. A true foodie event, guests and attendees will be joined by Rachel Weston, award-winning journalist and chef, who will share her passion for making seasonally inspired meals from food grown locally. Just published in May, her new book, “New Jersey Fresh: Four Seasons of Farm to Table,” features five of the Rutgers Gardens Farm Market vendors… The 2015 Hamilton Award for Dedication and Outstanding Commitment will be presented to Dr. Robert Goodman, executive dean of the School of Environmental and Biological Sciences at Rutgers University. Since taking on the role of executive dean in 2005, Bob has been a true supporter and friend of the Rutgers Gardens. Over the past 10 years he has provided funding, guidance, and support on a number of key projects, such as the development of the Advisory Board, the completion of the Feasibility Study, and the start of the Master Plan.

Honoring their work in fighting hunger, first lady Mary Pat Christie and the New Jersey Heroes Foundation have designated three deserving individuals as nominees for the August online New Jersey Hero poll… Kristina Guttadora leads the “Farmers Against Hunger” effort as program director and executive director of the New Jersey Agricultural Society. As just one of two full-time employees, Guttadora relies on an amazing support team of part-time seasonal staff, volunteers, partners and board members to operate the Garden State’s first and broadest farm gleaning program. Learn more at http://www.njagsociety.org/farmers-against-hunger.html… New Jersey Heroes is an initiative first lady Mary Pat Christie began in 2010 to showcase the positive and unique ways people and organizations are impacting New Jersey and their communities.

Ira Helfand hopes Pope Francis will call for the abolition of all nuclear weapons when he addresses Congress in September and Helfand has reason for cautious optimism… The Springfield, Mass., physician is co-president of International Physicians for the Prevention of Nuclear War. It was awarded a Nobel Peace prize in 1985 “for spreading authoritative information and raising awareness of the catastrophic consequences of a nuclear war.”… It takes the work of several peer-reviewed studies done by atmospheric scientists Alan Robock of Rutgers University, Brian Toon of University of Colorado-Boulder, and Richard Turco of University of California, Los Angeles, who have found that if India and Pakistan each exchanged fifty 15 kiloton-size bombs — a tiny fraction of the size of the warheads in the U.S. and Russian arsenals — they would create immense firestorms that would quickly envelope the planet with layers of dense stratospheric smoke… Robock, a professor in the Department of Environmental Sciences, told NCR that his research reaffirmed his belief that nuclear weapons pose the “greatest and most immediate threat to humanity.”

The US Trotting Association is funding research to evaluate whether cobalt is a performance-enhancing substance. In doing so, it will assess its effects on red blood cell production… The fresh research will be carried out by Dr George Maylin, from Mo…

Past the gates and security checkpoints, down the miles of reinforced pier where train cars load ordnance aboard warships, beneath the waves and the watchful eye of the United States Navy, sit the world’s most heavily-guarded shellfish… For three yea…