High above southwest Pennsylvania, it’s not unusual to look up and spot a bald eagle flying thousands of feet in the sky, on the hunt for prey. What’s especially surprising is that its nest isn’t in a secluded forest; it’s in the industrial heart of Pittsburgh, in a neighborhood called Hays…”Cities have lost a lot of biodiversity, but they support a lot more than we normally expect them to,” agrees Myla Aronson, a visiting professor of ecology at Rutgers University in New Jersey. She and several other researchers around the world recently published a comprehensive study that found while urbanization does decrease the abundance of plants and animals, the mixture of species continues to resemble the mix of the region.

After Hurricane Sandy slammed into New Jersey, much of the spotlight focused on places that face the Atlantic or the Raritan Bay where homes and boardwalks were splintered into unrecognizable heaps of lumber. But the storm exposed the vulnerability of towns normally thought to be protected by the barrier islands, like Mystic Island in Little Egg Harbor and Beach Haven West in Stafford Township…”The defense that’s being done on the oceanside is linear. You can focus on just a line of defense. You can’t do that in the bay,” said Michael Kennish, a research professor at Rutgers University’s Institute of Marine and Coastal Sciences. “On the bayside, we have real headaches. We have real problems there.”

The state of New Jersey needs to step up efforts to deal with the effects of climate change, a goal that might be achieved through the establishment of a statewide group to foster preparedness for the potential impacts of global warming, according to a new report…”Climate change is real; it’s happening now and it’s affecting New Jersey,” said Anthony Broccoli, professor of atmospheric science at Rutgers University at a forum held at Duke Farms.

On a blistering summer day, nothing feels quite so good as taking a dip at in the ocean. But where along the Jersey shore can you find the not-too-cool, not-too-hot “sweet spot” for water temperatures, the one that provides just enough relief from the heat and makes you go “ahhhh”?…”Most people like it to be at least in the mid to upper 70s,” said Josh Kohut, assistant professor of Physical Oceanography at Rutgers University and founding member of the university’s Coastal Ocean Observation Lab (COOL). “Certainly when we had upwelling last year and it got into the 50s that was a bit too cold for most people.”

The state needs to step up efforts to deal with the effects of climate change, a goal that might be achieved through the establishment of a statewide group to foster preparedness for the potential impacts of global warming, according to a new report…”Climate change is real; it’s happening now and it’s affecting New Jersey,” said Anthony Broccoli, professor of atmospheric science at Rutgers University at a forum held at Duke Farms. 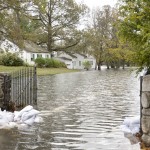 Rutgers Energy Institute associate director Robert Kopp served as co-leader on a prospectus, the first report to provide a national set of estimates of costs of climate change to key sectors of the state economies. Read more on Rutgers Today.

The challenge continues: Can endangered piping plovers thrive nesting in one of the busiest state parks in New Jersey? The tiny family giving it a go south of Barnegat Lighthouse this summer is surely determined…”The eggs just hatched the day before Father’s Day; that was really exciting,” said Karen Leu, a research technician with Rutgers University. “As far as nests, though, we only have the one piping plover nest out there. In previous years we’ve had two to four pairs. This year numbers have been going down for all the sites, actually. That’s a little depressing.”

Today’s Millennials could be tomorrow’s very sweaty retirees thanks to temperatures and humidity levels that are rising so fast that, by the end of this century, simply going outside could be deadly. “As temperatures rise, toward the end of the century, less than an hour of activity outdoors in the shade could cause a moderately fit individual to suffer heat stroke,” said climatologist Robert Kopp of Rutgers University, lead scientific author of the shocking report ‘Risky Business.’ “That’s something that doesn’t exist anywhere in the world today.”

The satirical specialists at The Onion might make food recall jokes at the expense of the FDA, but the safety of the US food supply is seriously better than ever…As Rutgers University food scientist Donald Schaffner pointed out during the recent IFT 2014 event, the federal government (a frequent target of ridicule and criticism) actually has proven itself to be on top of things in several ways. “Over the last 25 years, a lot of the research and innovation in food safety has been driven by the changes in regulation,” he said.