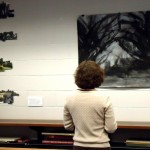 SIGHT/SITE, a solo exhibit at the Rutgers Art Library on Voorhees Mall during the month of February, featured the work of Landscape Architecture graduate student Jennifer Burkhalter. SIGHT/SITE was a study of the Yew Garden at Rutgers Gardens and consisted of a series of charcoal drawings, three-dimensional collages and mixed media pieces. The Yew Garden […]

As the happy hour crowd poured in on a recent weeknight, the kitchen and bar staff at Hock Farm restaurant scrambled to meet the incoming orders. One used her hands to toss locally grown Romaine hearts with anchovy dressing in a metal bowl, while another, facing diners from behind a marble countertop, used his fingers to sprinkle cojita cheese and red onion into chicken tacos…California is a straggler in banning bare-hand contact with ready-to-eat food. A state-by-state review of food codes shows 41 other states have a version of the legislation signed last year by Gov. Jerry Brown…”It’s not about whether you wear gloves or not,” Pan said. “It’s about how clean the surfaces (touching food) are. We need to have the conversation go back to, ‘This is about food safety.'”Even gloves can spread contamination if they are not changed regularly, said Don Schaffner, a food scientist at Rutgers University.

It was the second day of spring, and the sun beamed into the South Harrison greenhouse as a small contingent of volunteer gardeners filed in throughout the early morning. Sheltered from the chill, the Gloucester County master gardeners worked to the faint sound of spraying hoses and the quiet buzzing of fans. “It cheers you up,” said retired teacher Barbara Trueheart, 62, of Washington Township. Another gardener likened the county facility to Oz, a magical place where the gardeners – volunteers under Rutgers University’s county cooperative extension – can always escape the bitterness outside.

Four Montana teens will attend the 2014 4-H Climate and Environmental Change Teen Summit at Rutgers University in New Brunswick, N.J., on March 27 to learn how to establish their own Youth Climate Science Program in Montana…After attending summit, th… 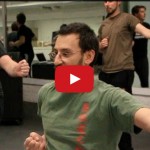 Nutritional Sciences major Candice Mak (SEBS ’15) participates in a new Rutgers Recreation class on Chen-style Tai Chi, which combines slow-flowing meditative movements with high-powered combat striking. According to Mak, she practices Tai Chi for relaxation and to help improve her concentration. Watch a video of a Tai Chi class in action.

The young woman from Latvia was already a success. Santa Pumpura, 21, was on her way to a finance degree at Rutgers University’s School of Business in New Brunswick. She was known as “the thinker” among her group of American friends, because of her studiousness and intelligence. She spoke English, Russian, Latvian and German…Pumpura, a junior who lived off campus in Piscataway, was pronounced dead about an hour later at University Hospital in Newark. The friend, 23-year-old Halim Habib – a senior at Rutgers’ School of Environmental and Biological Sciences – remained at University Hospital this afternoon, Flynn said. 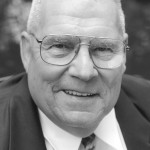 Professor Emeritus Roy H. DeBoer passed away on March 17, 2014. Roy played a seminal role in the formation of the landscape architecture program at Rutgers and in New Jersey. His teaching career at Rutgers, which started in 1955, spanned more than 50 years. Founder of the Landscape Architecture program, he served as a full […]

FOR IMMEDIATE RELEASE March 20, 2014 EDITOR’S NOTE: You are invited to send a reporter, photographer or camera crew to cover this event, or arrange pre- or post-summit interviews with Janice McDonnell, 4-H Science, Engineering and technology agent, by cell phone at 732-586-1130, office telephone at 848-932-3285 or by email at mcdonnel@marine.rutgers.edu. Four Montana teens […]

FOR IMMEDIATE RELEASE March 26, 2014  EDITOR’S NOTE: You are invited to send a reporter, photographer or camera crew to cover this event, or arrange pre- or post-event interviews with Janice McDonnell, Rutgers 4-H science, engineering and technology agent, by cell phone at 732-586-1130, office telephone at 848-932-3285 or by email at mcdonnell@marine.rutgers.edu. Or contact […] 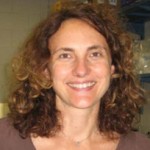 A SEBS Food Science research team, led by Loredana Quadro, is looking into engineering human-friendly bacteria to produce high levels of beta-carotene within the human gut by working with mouse models. Read more at Rutgers Today.