“Diabetes” was the theme of the 6th Annual Pioneers in Endocrinology Workshop held at Rutgers on Sept. 17 at the Busch Campus Center. The workshop was sponsored by the Rutgers Endocrine Program; Rutgers NJAES Cooperative Extension; Department of Animal Sciences; Rutgers-RWJMS Division of Endocrinology, Metabolism, and Nutrition; the New Jersey Institute for Food, Nutrition, and Health; and the New Jersey Obesity Group. 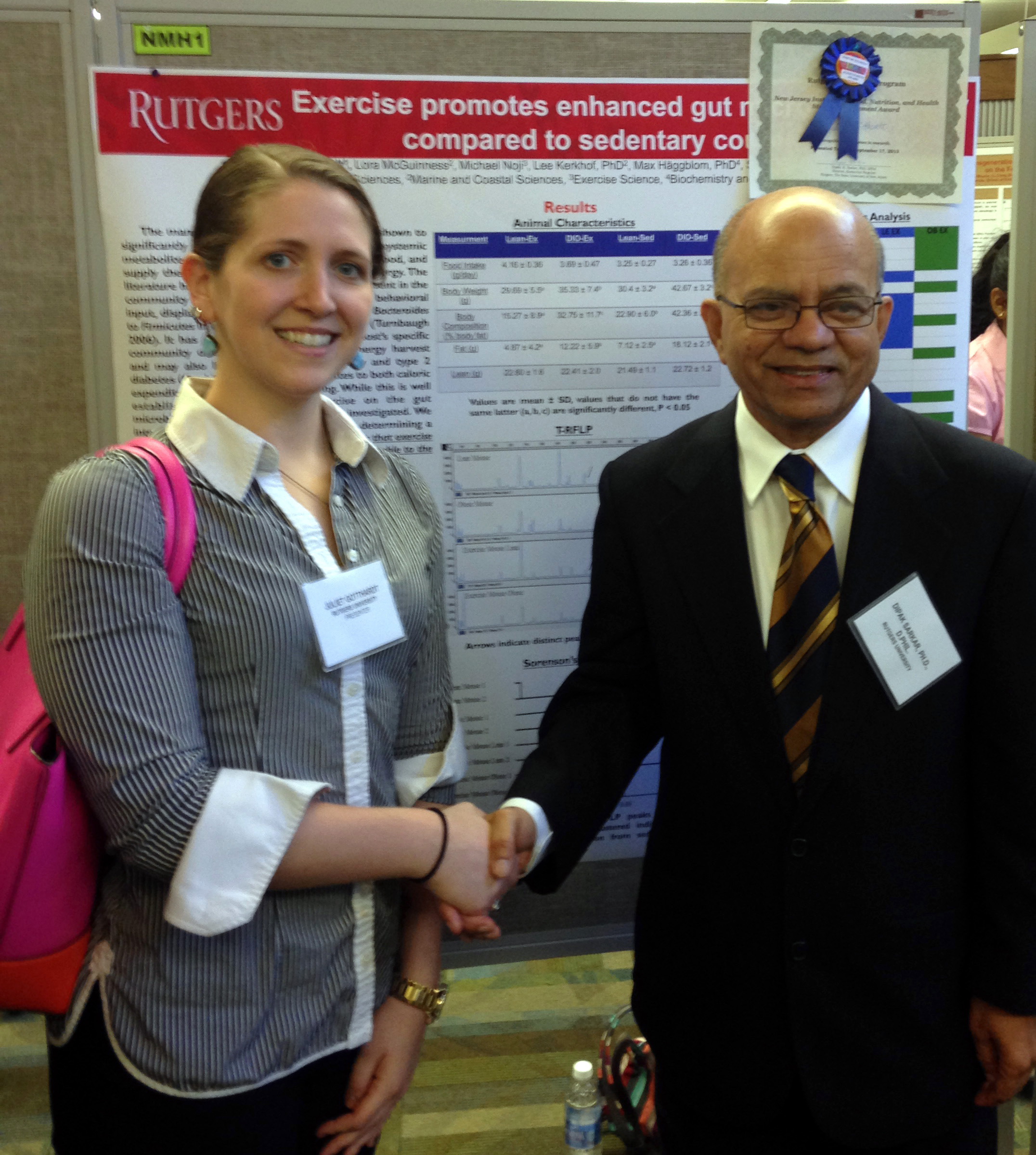 Dipak Sarkar, director of the Rutgers Endocrine Program and professor in the Department of Animal Sciences, welcomed over 170 participants and spoke highly of the legacy of Allan H. Conney, who had registered for the workshop but sadly passed away on September 10. A world-renowned cancer researcher and pharmacologist, Professor Conney was the Director of the Susan Lehman Cullman Laboratory for Cancer Research at the Ernest Mario School of Pharmacy and one of Rutgers’ most distinguished faculty members. After a moment of silence to mark Prof. Conney’s passing, Sarkar introduced Christopher Molloy, interim chancellor, Rutgers Biomedical and Health Sciences, who also welcomed the group to the workshop and praised Dr. Conney’s contributions in the advancement of cancer preventive treatments.

The Rutgers Endocrine Program also lost a friend, renowned epidemiologist and pioneer David Barker, a presenter at the 4th Annual Endocrinology Workshop at Rutgers in 2011.

Following the opening remarks at this year’s workshop, Louis Amorosa, chief of the RWJMS Division of Endocrinology, Metabolism & Nutrition introduced the first speaker, Jesse Roth, MD, FACP. Roth is an investigator and head of the Laboratory of Diabetes & Diabetes Related Disorders at the Feinstein Institute for Medical Research and Professor of Medicine at the Albert Einstein College of Medicine. His presentation, titled “Metabolic Syndrome 2013 – By the dawn’s early light,” underscored that diabetes has become one of the most prevalent diseases in this century. Roth gave some historical background of the research that led to a better understanding of this disease and pointed out several recent research developments that have great potential to either cure this disease or to prevent its progression. A question-and-answer session following this talk was led by Carol Bagnell, chair of the Department of Animal Sciences.

Sue Shapses, professor in the Department of Nutritional Sciences and director of the New Jersey Obesity Group, introduced the second speaker, Gerald I. Shulman, M.D., Ph.D., the George R. Cowgill Professor of Medicine (Endocrinology) at Yale University and an investigator of the Howard Hughes Medical Institute. Shulman’s presentation was titled “Cellular Mechanisms of Insulin Resistance: Implications for Obesity, Lipodystrophy, Type 2 Diabetes.” His talk focused on the use of magnetic resonance spectroscopy to identify the signaling pathways that go awry in diabetes and other metabolic disorders. Following this talk, Larry Katz, director of Rutgers Cooperative Extension and professor in the Department Animal Sciences, led a question-and-answer session, which was followed by a luncheon.

The afternoon session featured 46 posters reporting state-of-the-art endocrine research being conducted at Rutgers. All posters that had students as first authors were carefully reviewed by judges and three students received New Jersey Institute for Food, Nutrition and Health “Student Achievement Awards” in recognition of their excellence in research. The winners were graduate students Meredith Camp (Endocrinology & Animal Biosciences; Bagnell lab) and Juliet Gotthardt (Nutritional Sciences; Campbell lab) and Ankush Rakhut, a Livingston High School senior who has worked in the Sarkar lab during the past two summers.

During the afternoon session, faculty members also participated in a roundtable meeting with the two workshop speakers. This year’s event was financially supported by several companies, including Millipore, R&D Systems, BioExpress, Dynalon Labware and Life Technologies, whose representatives set up booths in the Fireside Lounge at the Busch Campus Center.

Little Known on how Wind Farms Affect Critical Mid-Atlantic Ocean Feature - The study, from Travis Miles, Sarah Murphy, Josh Kohut, Sarah Bosetti, and Daphne Munroe, SEBS DMCS, reviewed existing literature on how wind farm construction affects ocean environments in Europe, where most offshore wind farm construction has so far taken place, and lays out what can be learned from the European experience, and what aspects about potential interactions remain unknown.